We were certainly looking forward to our first visit in Philadelphia. I am an amateur history buff, and find the Revolutionary War period to be especially interesting. Crystal is not so much about the battles, as she is about the personal stories. Our hopes were that Philly would provide plenty of things for both of us to enjoy. 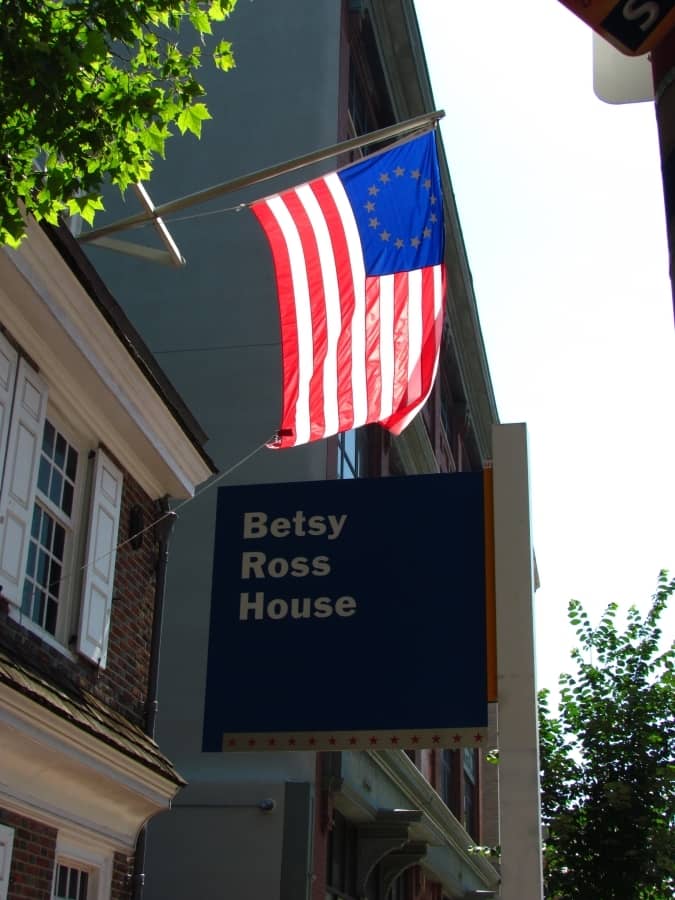 History in the Making

One of the “must sees” on our list was the Betsy Ross House. Situated on Arch Street, this diminutive domicile looked so small from the outside. Being over 250 years old, we certainly could appreciate the care and upkeep that is required. This is especially true considering the large number of visitors who pass through this building each year.  We paid our $5.00 entrance fee per adult, and started our walk back through time. For $2.00 more you can add an audio component to the tour, but we opted out. Before entering into the main rooms of the home, visitors learn about the history of the flags flown around the Revolutionary War period. While this older flag had the thirteen stripes to represent the colonies, the corner was occupied by the British Union Jack. Many believe this to be the first flag of the new United States. While some historians believe the impression was to show the removal of English control, it didn’t take long before the removal of all British icons would be desired. Many have the notion that Betsy Ross was a seamstress, but in reality she was an upholsterer. She apprenticed under John Webster, who was a popular Philadelphia upholsterer. Betsy spent many years learning the art of repairing rugs, curtains, bed-covers, umbrellas, and other items that required skilled sewing. According to an oral history from Betsy Ross’ descendants, three men visited her in 1776 to ask her to construct a new flag. Among the group was George Washington. He produced a scrap of paper that held a sketch of the new design, which included the 13 stars and stripes.

When Washington asked her if she could create it, Betsy Ross replied “I don’t know, but I will try”. While some argue whether Betsy was the person responsible for our original version of Old Glory, there are three interesting facts that point to the possibility. 1) Betsy’s late husband’s uncle was a member of the flag committee. 2) It was common for upholsterers to take on odd jobs, and especially during wartime when standard work was unsteady. 3) On May 29, 1777, Betsy Ross received a large payment from the Pennsylvania State Navy Board for making flags. Just a couple of weeks later, on June 14th, Congress adopted the Stars and Stripes as the official flag of the United States of America. As we toured the home, we noticed the narrow, and steep staircases. After viewing the upstairs sleeping quarters, we worked our way down to the upholstery shop. Here we had a chance to hear some stories from Betsy herself (or at least a character actress). After listening for a while, we continued to explore the house. Down another flight, we found the lowest level of the home. Here was the kitchen, as well as the storage area. Many displays were available that showed items which would have been used in this early period of our nation. Lots of visitors mulled around this portion of the house, which could have been because it was cool down there. We studied the exhibits for a while, and eventually decided it was time to move on to other areas of the city. Time to return to the reality of nowadays, which included facing the mid-90’s temperatures that Philly was experiencing. Oh well, I’m sure our forefathers faced the same conditions, except without the modern conveniences. So do you think Betsy Ross made our first National flag?