How The St. Louis Science Center Brings Science To The Masses

How The St. Louis Science Center Brings Science To The Masses

St. Louis offers so many great educational opportunities for visitors of all ages. Our visit to the St. Louis Science Center sparked our imaginations and opened our minds to new ideas and possibilities. Located in the Forest Park neighborhood, this center is designed to engage all ages in a series of fun, interactive displays and offers free general admission. The day was rainy, so we were happy to be enjoying an indoor activity.  We found a spot in the busy pay parking lot, and made our way into the space to explore some of their 700 exhibits.

We want to thank the St. Louis Science Center and Explore St. Louis for their hospitality. Rest assured that all opinions are our own.

Heading Back In Time

After making our way through the crowd near the entrance, we headed downstairs to the lower level. As we descended the stairs, our attention was drawn to a large animatronic T-Rex, which was preparing to make a meal of an unfortunate triceratops. Nearby was a display that holds a recast of a T-Rex skull. It helps put the immense size of these creatures in perspective.

We stepped into the fossil prep lab, which was very popular with kids. Here they could inspect fossils and see where they were discovered. There is even an area for them to dig for their own fossils. A group of volunteers worked on restoration of specimens that had been brought to the Science Center. These staff members were happy to explain details of the work they were doing, as well as answering any questions by the curious crowd.

On the opposite side of the staircase we located the lockers, which were large enough to hold jackets and our camera bag. As we turned away from our locker, we noticed a crowd gathered around a long table. We decided it required a closer look. What we found was a game that pitted two contestants against one another. The goal was to move the ball closer to yourself than your opponent. This was done by relaxing your mind and lowering your brain waves. Observers could watch the wave signals of the two contestants on a digital display overhead. The funny part was that whenever they would try to concentrate on winning, there brain activity would increase. This is one game that it pays to just chill out!

Everywhere we went we found the St. Louis Science Center to be filled with interesting displays. A large seating area is set around a stage used for science demonstrations. When we first discovered this area, one of the staff technicians was showcasing a robot. We watched as a young visitor helped program the robot through a series of trials and errors. It was nice to see how patient the staff member was with him, and soon the robot was performing as desired. Later, we passed by and noticed a show taking place. The same staff member was performing an assortment of science experiments that had the crowd engrossed. These days it seems that power is always in the news. From alternate energy sources to conservation tips, electricity production is imperative to all of us. The St. Louis Science Center dedicates a large exhibit to this important issue. When we first entered the building we saw this oversize hamster wheel that all of the kids were waiting to experience. It was set up to power a contraption that sent balls on this wild and wacky path around the atrium. We didn’t realize it, but it introduced the idea of alternate energy sources in a fun way.

The energy exhibit does a good job of explaining the basics of energy production and distribution. It also includes displays that show why and how electricity is used in our daily lives. This information is presented in an easy to understand way, which is explainable to most ages. We noticed lots of parents interacting with their kids in this area, as it supplied a good education opportunity.

Like so many of the exhibits in the science center, this area had lots of interactive displays. One table was set up so that by adding the right pieces to the table you ended up building a power grid. It required some trial and error, but it was easy to tell when you had the circuit completed, since the pieces would light up. Nearby was a game where two people could compete to feed pieces of “coal” into the furnaces. LED displays kept track of the length of time that the “coal” would supply power. We aren’t positive, but the kids competing seemed more interested in throwing things than how much power they were producing. There were a lot more displays in this area, so plan on spending some time here. 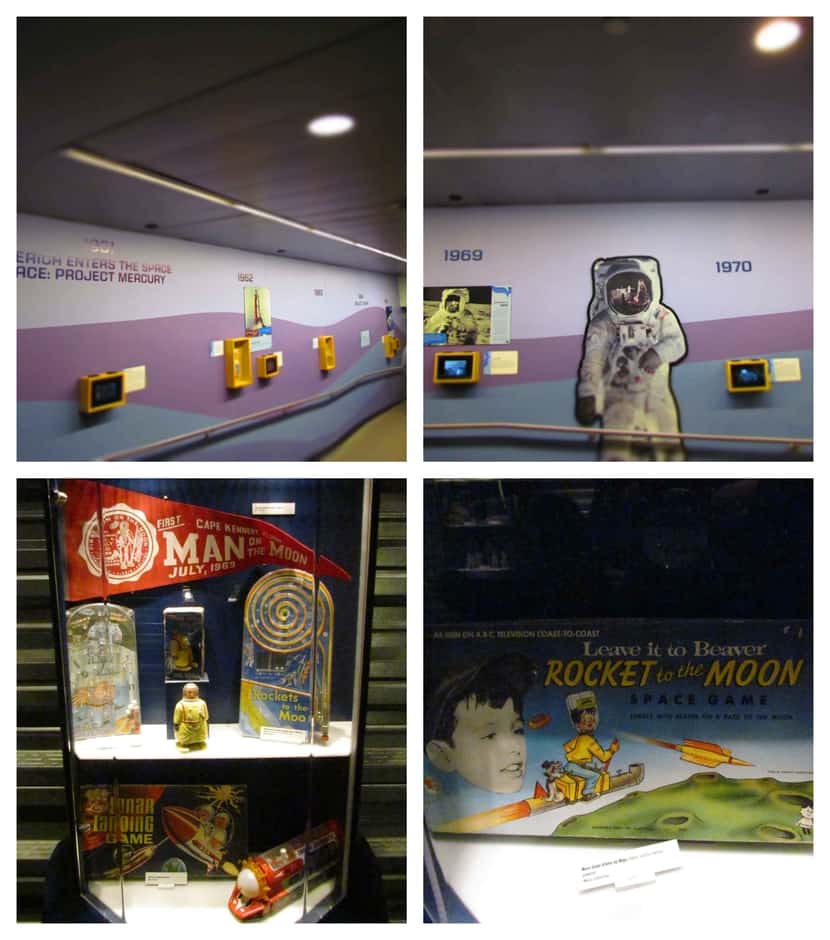 The St. Louis Science Center has an interesting shape with an arm shooting off over the nearby Interstate highway. They have made the most of this space by adding displays all through the overpass. The bridge that crosses the highway has radar guns set up to see how fast traffic is moving (Not very fast during rush hour!) The next area is dedicated to the space race, which most of us remember from our youth. As we climbed a slight ramp, we inspected the timeline that highlighted notable events that occured during roughly two decades. Interspersed in the area were some display cases filled with various pieces of memorabilia from the period. At the top of the ramp, we reached the start of the Mission: Mars exhibit. Some interesting posters advertised the need for explorers, which a couple of decades ago would have been comical. These days it is hard not to imagine that this type of exploration could be just around the corner.

Even this area is packed with interactive displays. We also noticed a couple of pay-as-you-play rides that visitors could do. One was a virtual reality exhibit, which we had recently experienced at one of our local museums. The second one was a flight simulator that had created quite a buzz. We watched as a couple people entered and buckled up into one of the two capsules. Once the program engaged they were able to control the motions of their simulator. These things rotate 360 degrees, which seemed like something we wanted to skip for now. (Some of you also realize that gravity sucks!) We did enjoy watching them take the simulator through its paces, before exiting the craft a little wobbly. Across the hall we found an exhibit focused on the Mars Rover. Visitors could program the robotic device to perform under extreme conditions. Participants went to another room and did the programming, then returned to see it in action. This simulated the delay that NASA programmers deal with on a regular basis. It certainly created a little frustration for some people, but another trial and error learning experience.

Past and Future Collide

This was the final area of the St. Louis Science Center for us to explore. Toward the far end we found a replica of Project Mercury, which was the first vehicle to put Americans in space. This reminded us of just how far we have come with technology in just over 50 years. As we moved back toward the entrance, we passed a model of the planet Mars. With our eyes set on this future destination, we look forward to watching the scientific breakthroughs that will aid human beings in crossing this next hurdle. The question is whether it happens in our lifetime. Do you think humans will ever make it to Mars? Let us know your thoughts!

Like this article? How about sharing it with friends! 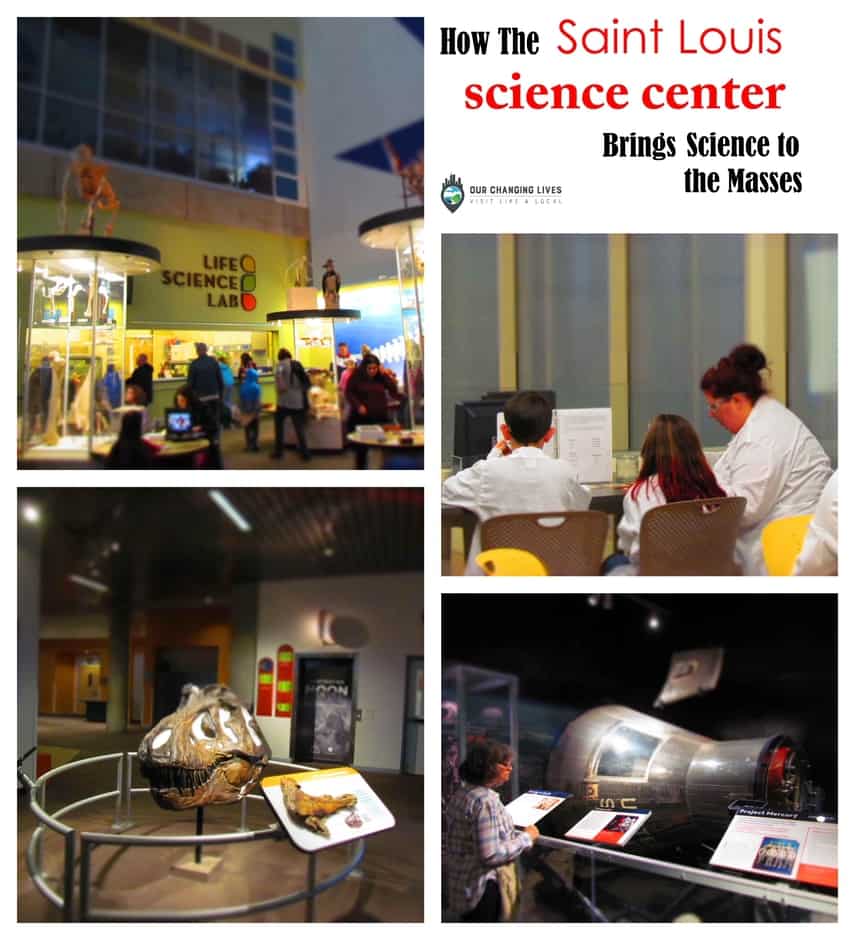