Hit the Mother Lode at Pizza 51

Hit the Mother Lode at Pizza 51

*UPDATE* The Mission Road location has closed, but you can still visit their KCMO location at 5060 Oak Street.

Some days the good things just fall into your lap. Pizza 51 West, at 5938 Mission Road was one of these good things. On a Sunday afternoon we were running late for having lunch. A quick check of the maps on my phone showed a pizza joint was fairly close to our location. Without any previous research we decided to just wing it, and drop in for a bite. 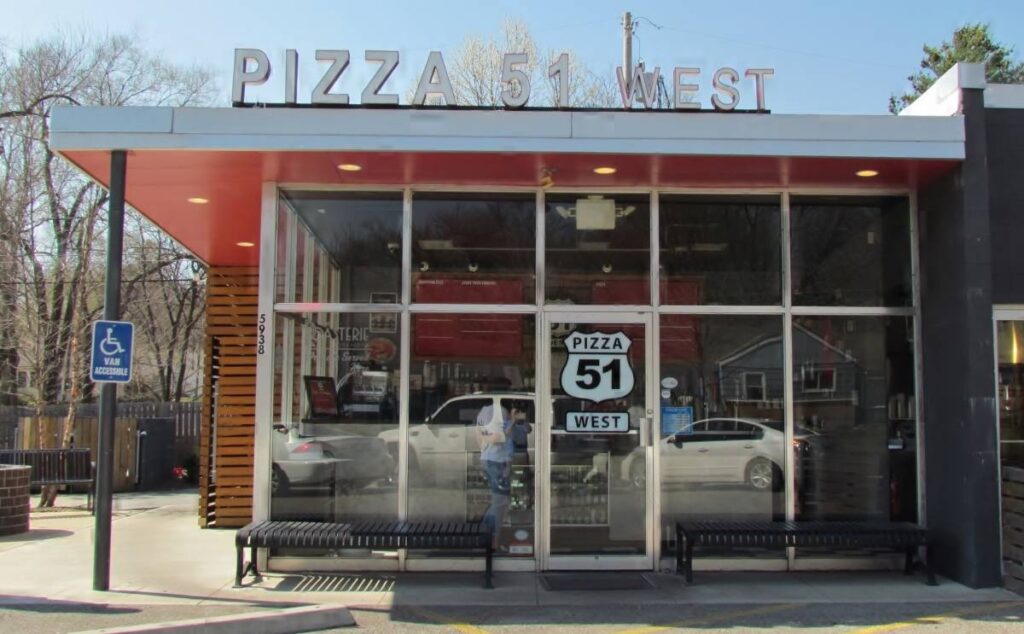 As we closed in on our destination we began to wonder if the map was wrong. We were clearly in the middle of a residential area. Soon we spotted our target, which was obviously a converted gas station. What we would later learn is that this is actually the second gas station that owners Jason and Shannon Pryor have converted. Their first location is at 51st & Oak in the Brookside area. Now we know where the unique name originated. Pizza 51 West is their newer location, which also serves breakfast. 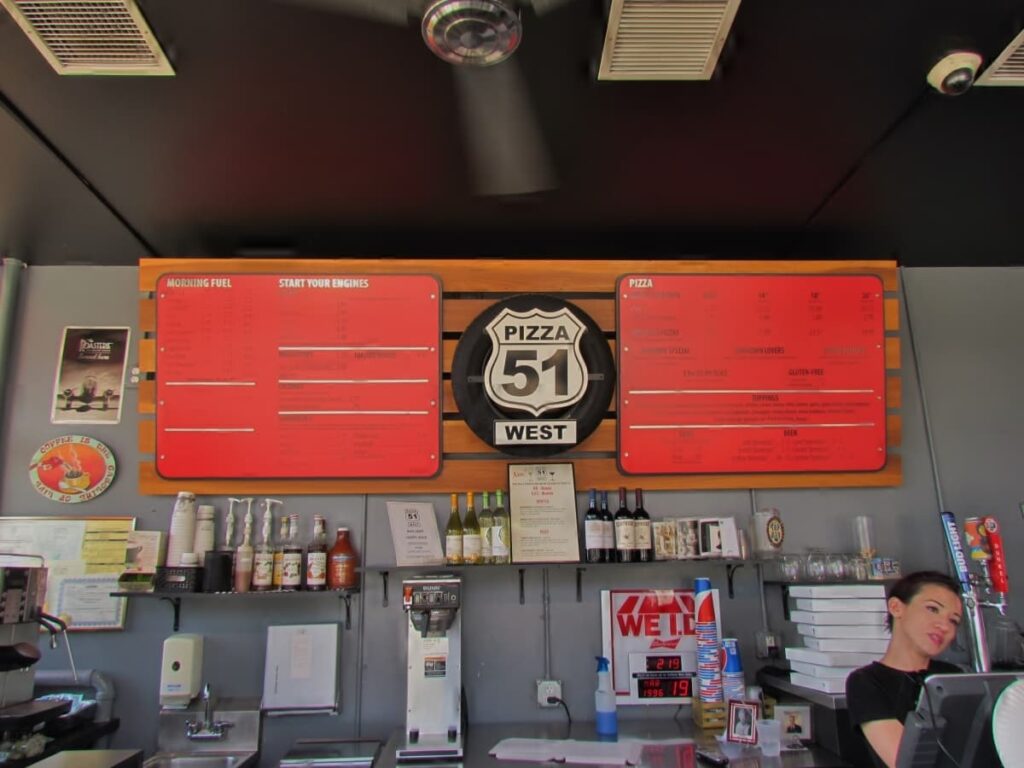 The interior has a retro feel, and the staff is extremely friendly. We were greeted, and received an explanation of their menu choices. Being later than normal, we each decided to just get a single slice. That should hold us over until our dinner time. At least that was the plan. 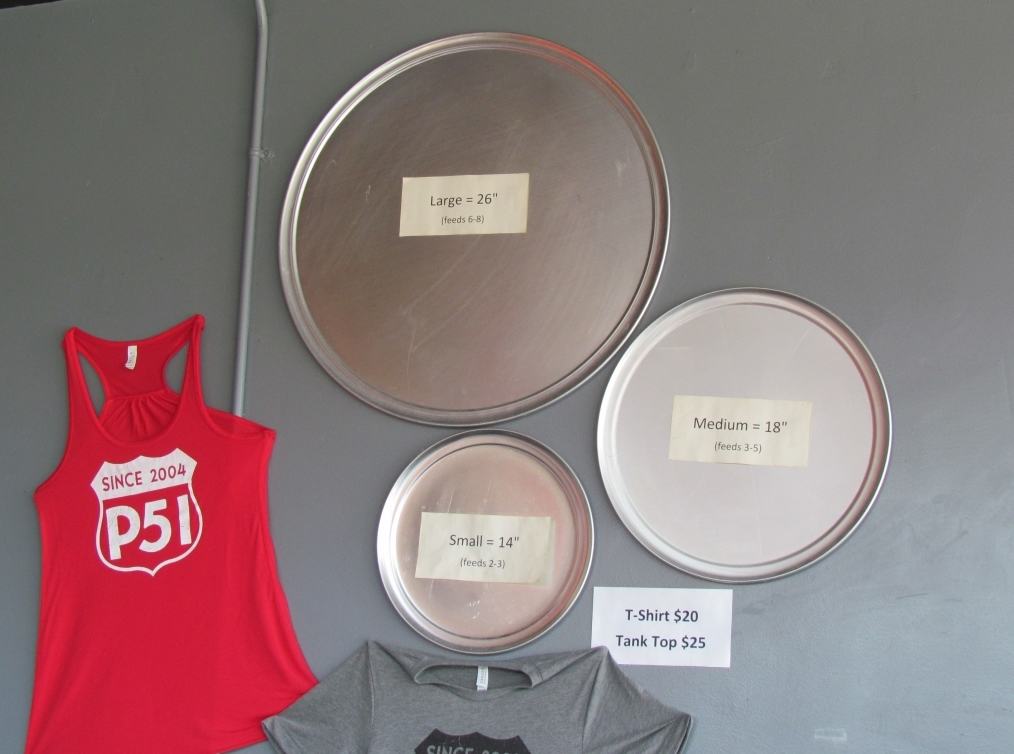 Have you ever had one of those experiences where there were signs all around you? Even with them all pointing to a single conclusion, it was still eluding me. I even noticed the overly large pans attached to the nearby wall, but it still passed me by. So Crystal ordered her standard pepperoni version, while I chose Pizza 51’s version of a meat lovers. The addition of a soda and a water, and the total bill was around $15.00. Of course, the specialty soda I ordered came with a $4.00 price tag, so the pizza was decently priced. We found a table in the middle of the restaurant. From here we had a great view of the preparation area. 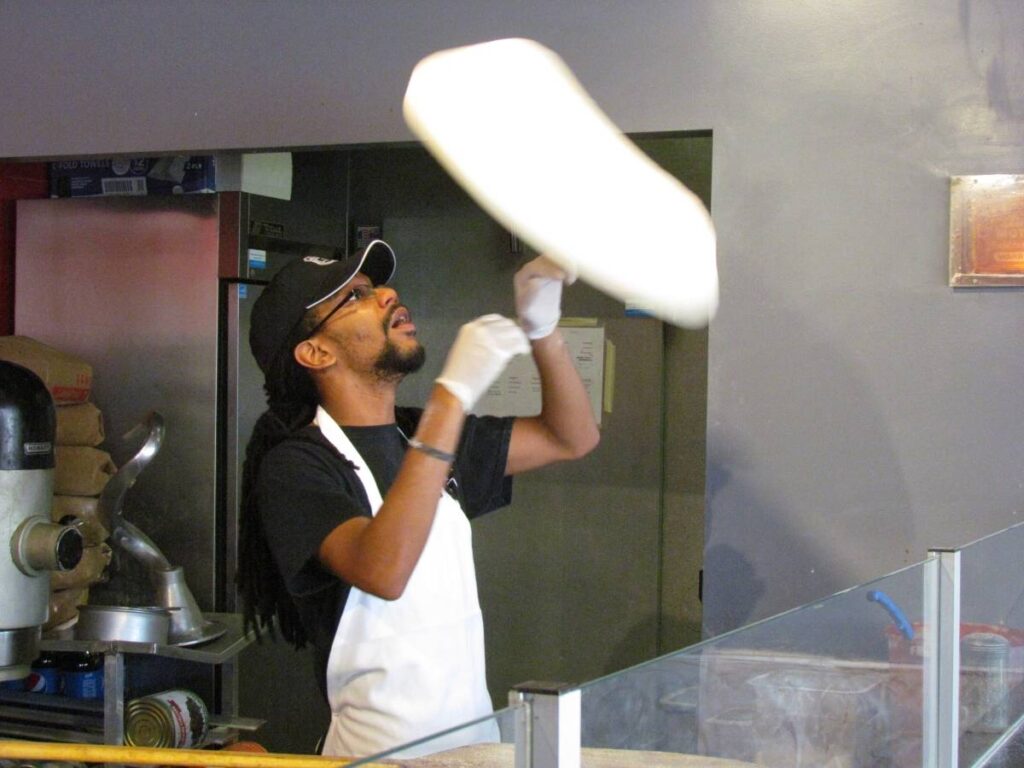 The place had a decent crowd for mid-afternoon. A soccer team had taken over the outdoor patio area. A couple families occupied tables nearby. Even the one that had to ask for multiple to-go boxes didn’t make the light come on in my head. What finally sparked my attention was the pizza dough being thrown. It started with an over-sized ball of dough, which he rolled out. Then as he tossed, it just kept getting bigger. I was wondering what he planned on doing with the extra. That is when he placed it on a 26″ wide pizza pan. Yeah, that is more than two feet wide. Let that sink in. For comparison, the average large pizza at an independent pizzeria is sixteen inches. 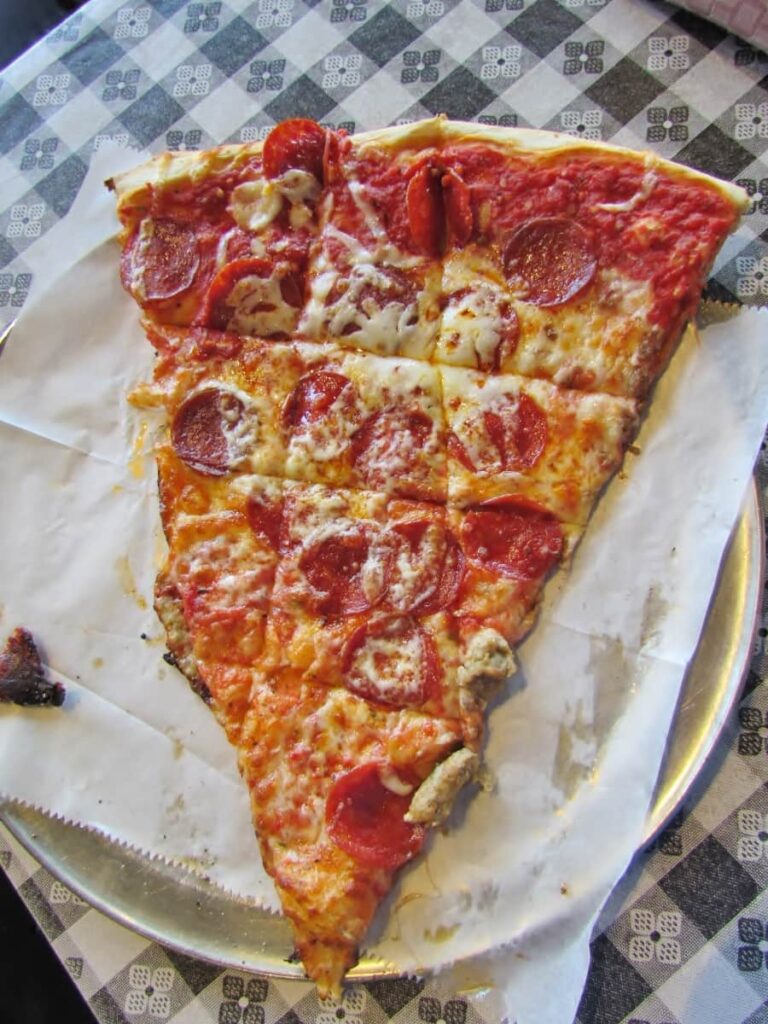 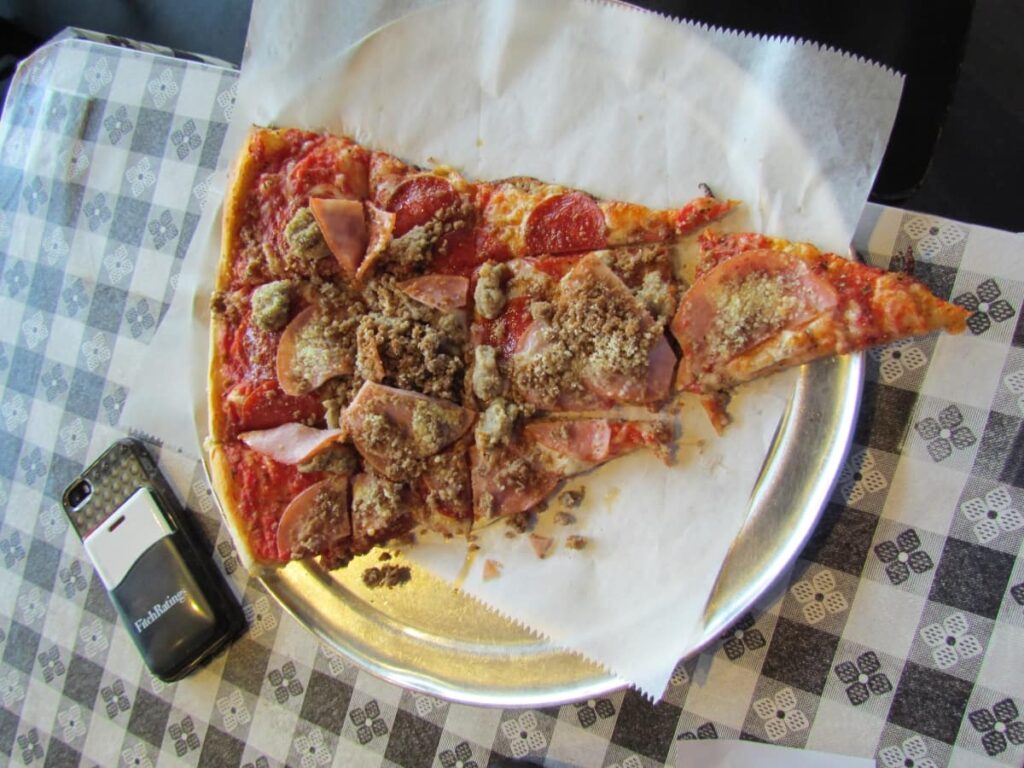 Now the light was not only on, but flashing brightly like a warning beacon. My eyes began to recognize the warning signs all around us. The soccer team that combined had only eaten about half of one pizza. The extra to-go boxes. These all pointed to what we were soon to face ourselves. After a few minutes, a server brought us our slices. Now these were not served on any old plates. These were delivered on small pizza pans. Of course the Pizza 51 small is what the competitors call a medium. No matter what you want to call it, just call it huge! Yes, that is an iPhone lying next to it. Well we got ourselves into this. The only thing to do was eat our way out. 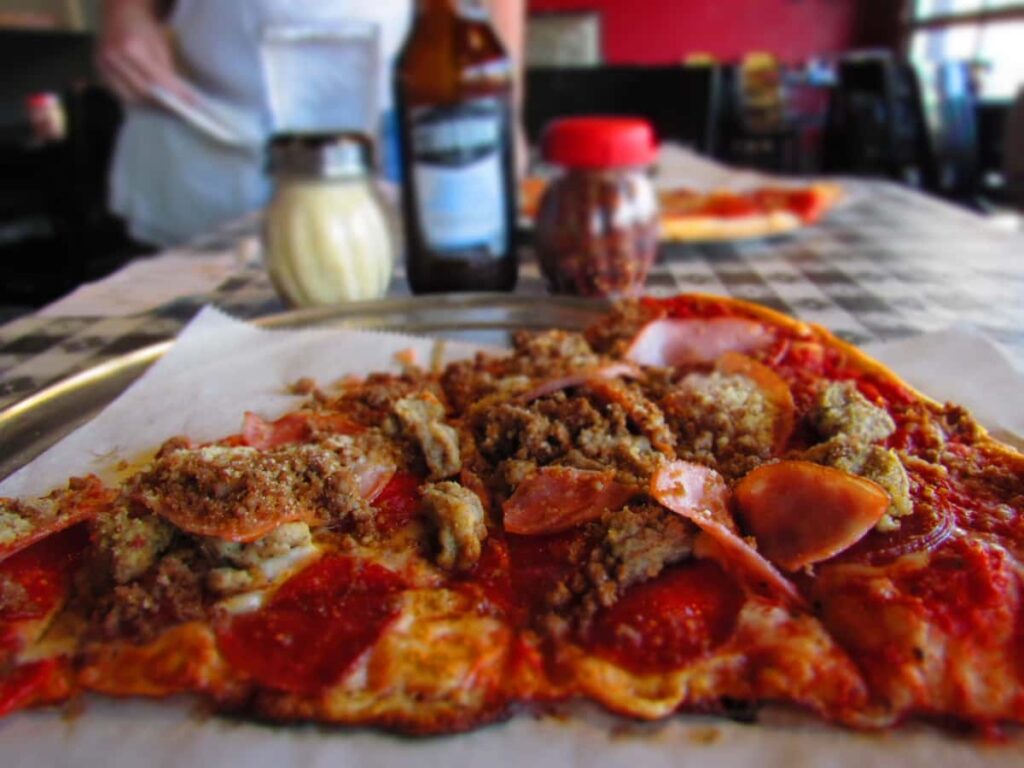 This was one of those times that I was jealous of Crystal’s choice. By being a little bland, and only ordering pepperoni, she had a more manageable meal. My desire to test the meat loving boundaries meant extra food to devour. We set to the task with vigor. The pizza is as good as it is large. It took considerable effort, but we finally finished our slices. That is not something I ever thought I would say about a single slice of pizza. In the end we claimed victory, and crawled back to our car to head home. Pizza 51 West had challenged us with their humongous slices, but we felt like champions. I mean we were clearly doing better than the soccer team. With this small victory in mind it seemed like a good time to go take a nap.