Spending time with our grandkids has opened up opportunities to visit some fun destinations. Being able to share our love for zoos with them helps us build a stronger bond while learning more about the world we live in. A recent excursion had us going on safari to the Topeka Zoo for a morning filled with exploration. An overcast late summer day was the perfect time for us to observe and interact with other species.

We want to thank the Topeka Zoo for hosting our visit. Rest assured all opinions are our own. The Topeka Zoo is located in the heart of Gage Park, which is also home to a miniature train, an aquatic park, and the Kansas Children’s Discovery Center. Being just an hour away from the Kansas City metro makes Topeka a great day trip destination. On this particular day, we arrived after a late summer thunderstorm. The overcast skies helped cool the temperature enough to make the animals a little more lively. It also seemed to bring out their inquisitive side, and we would find them checking us out as much as we were watching them.

The zoo has a considerably smaller footprint than the Kansas City Zoo, which makes it much more manageable for a single visit. We started our explorations with a visit to Black Bear Woods. This exhibit is designed like a ranger’s station which offers views from an elevated walkway. A variety of North American species can be found in this part of the park. Getting a Better View

The star of the show on that day was the black bear. After watching him sniffing around the exhibit, he made his way to a large tree. In no time he was scaling it for a bird’s eye view of the surroundings. This put us eye-to-eye with one of Crystal’s favorite animals. I still remember her reaction to seeing these in the wild, during a visit to Smoky Mountain National Park. We pondered what this bear could see from his perch, before finally moving along to more of the zoo. It had been a while since our last visit, so we were excited to see some of the changes that have happened. One of the newer spaces is Saving Sharks. This highly-touted exhibit helps showcase the danger that the world’s shark population is facing from overfishing. The Topeka Zoo has created a mix of static displays, interactive mechanical devices, and a touch tank.

Getting a Feel for the Space

The highlight of this exhibit has to be the touch tank. Here guests can get up close and personal with some sea creatures. Our granddaughter was more than happy to demonstrate this by checking out a starfish that was making its way up the side of the tank. After departing the exhibit, we walked along the exterior which is decorated to replicate a beachfront area. The Topeka Zoo has increased its additions of public art that give guests more to see between the animal sightings. Continuing along the Adventure Trail, we came to the Lorikeet enclosure. It was pretty obvious, as the squawking grew louder during our approach. After passing through the twin doors, which help keep the birds inside, we found ourselves facing these colorful feathered creatures. A handler was staffed inside to tell guests about the Lorikeet’s habits. It was obvious that they were used to her presence and even took delight in her footwear. We watched this flock of squawkers for a bit and then decided to move on. Something that became apparent during our visit was the addition of public art. In past years, the Topeka Zoo was mostly decorated with visual plantings. While these were pleasing to the eye, adding these art pieces helps take it to another level. This zoo is becoming one of our favorite smaller parks to visit. When you combine its manageable size with all of the visual appeals, it’s hard to beat. We continued on toward the African section of the zoo. In the past, the pathway would have led us to the Lion’s Pride exhibit. This has been changed to Camp Cowabunga, which brings in more flavor of the Dark Continent. Visitors are transported to a jungle world complete with an overhead crosswalk for the resident Patas monkeys. This section of the zoo was renovated in 2018. It is exciting to see that they continue to update the Topeka Zoo. The Topeka Zoo is including some interesting display characteristics to their exhibits, as well. As we watched the Patas monkeys enjoying a meal, we noticed the use of an old trail Jeep in the design of a glass wall. Visitors can hop up in the driver’s seat to get a view of the animals. It feels like you are going on safari in the heart of the jungle. Information panels give some additional insight into the background of the animals we are observing. Just a little way around the bend we spotted the African Painted Dogs. These colorful canines are social creatures that travel in packs. Unlike some predators, these animals tend to let their young feed first. Their unique coat coloring helps them blend into the grasses of the savannah, where they hunt for antelope. During the renovation that brought Camp Cowabunga to life, the zoo also revamped the Discovering Apes exhibit. Since the mid-1980s we have enjoyed watching the great apes lounge and play. The facelift brought a new space that houses orangutans. The exhibit has been designed to replicate the treetops of Borneo. Visitors can watch all the action during a stop at a station mimicked after Camp Leakey. Our next stop was at the Jungle Cats exhibit. We happened along as feeding time was wrapping up. This gave us a chance to watch a Sumatran Tiger gnaw on a bone. While it was very attentive to its treat, it still kept a watchful eye on those passing by. By now, we were approaching the Noon hour, and our hunger was begging for attention. We didn’t want to leave without a visit to see the giraffes. There is something calming about watching these graceful creatures in motion. As with most of our other stops, they were also engaged in eating. It looks like all of the creatures were satisfying their hunger, which reminded us to do likewise. 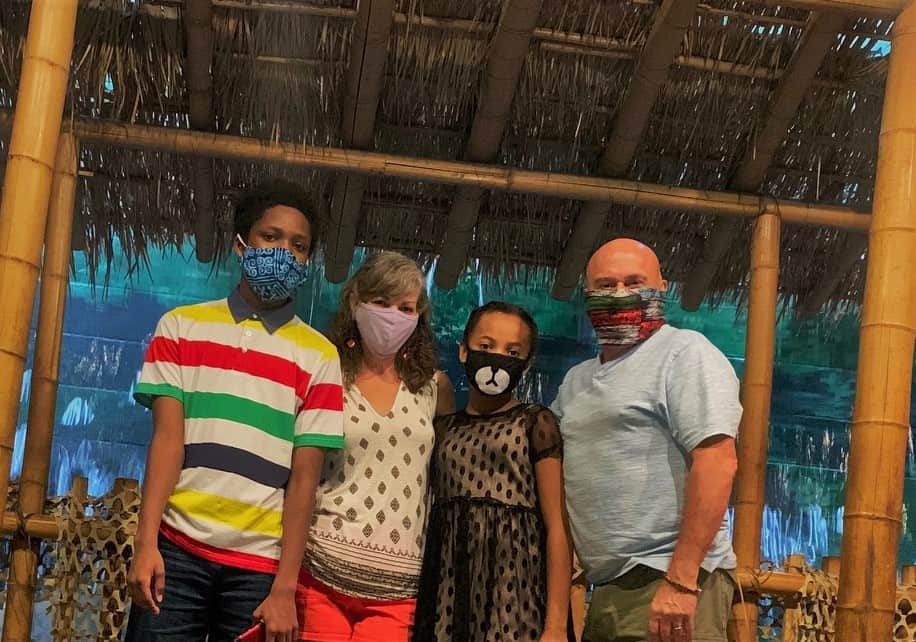 It is safe to say that the grandkids enjoyed going on safari as much as us. It was nice to see all of the revisions and updates that have been made at the Topeka Zoo. This smaller venue is perfect for a day trip, as it can be seen in a relatively short amount of time. Of course, you can also slow your pace and just take in the entire space. There is plenty of shady spots that make a great place to observe nature in action. Whatever your pace, this zoo is sure to please.