Escape The Interstate – Cars on the Route

Escape The Interstate – Cars on the Route

People who journey along the old “Mother Road”, known as Route 66, will periodically encounter some interesting sights. These bites of Americana hearken back to the golden age of automobile travel, and inspire feelings of nostalgia in many travelers. Galena, Kansas sits at the eastern edge of the Kansas portion of the route, which is small in comparison to many states. During our visit to Galena we had an opportunity to visit Cars on the Route, which is a refurbished filling station from the Route 66 heydays.

We had met up with a group of Instagrammers, who were on-hand for an event hosted by Travel Kansas, the state’s tourism bureau. This was only our second Instagram party, but we were already becoming big fans of the idea. It’s a great way to meet others who have a passion for sharing the wonder we find all around us, as well as discovering new ideas for creative photography. It ends up being a win-win for all involved. Hosting this event with the Route 66 theme was an attention-getter for us, since we are from the Baby Boomer generation. This particular portion of the Mother Road was familiar territory for me, since my grandparents had once lived in the nearby town of West Mineral, Kansas. We would often “get our kicks on Route 66”, as we traveled towards Joplin, Missouri or Miami, OKlahoma. The Start of Something Special

After Interstate 44 was constructed, much of the traffic that used Route 66 dried up. With the lack of tourism dollars, many of the small towns along the route suffered the same effect. Over time cities shrunk to towns, and towns shrunk to near ghost town status. Such was the case in the southeast corner of Kansas, as well. An old Kan-O-Tex filling station that sat on Main Street, in Galena, had fallen into disrepair, but four women had a vision to change this. These women, including Melba “The Mouth” Rigg, (pictured above) purchased the property and set about renovating it into a tourist attraction. Although the interstate was the quickest path, many travelers were beginning to reconnect with the original Highway 66 paths. This would lead them straight through Galena, where they could experience Cars on the Route. 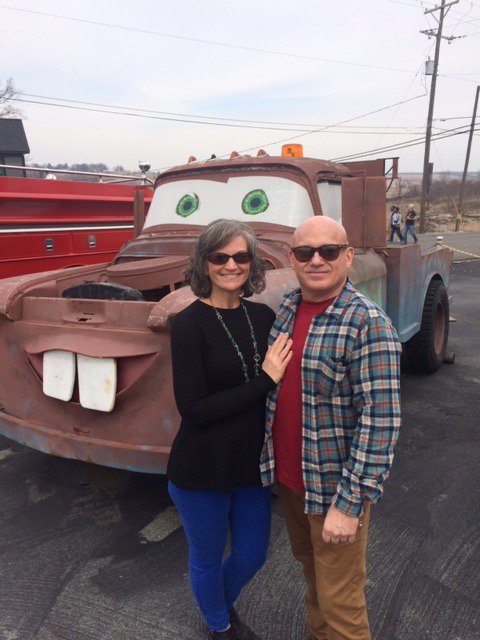 The story goes that this place was visited by director John Lasseter, of Pixar fame, during a family trip. When research was being done for an upcoming movie, staff toured this site and saw the boom truck. This was the inspiration for the the vehicle Tow Mater, which would be featured in the animated movie Cars. Other places and people they met along the way would fuel other parts of the story, which we will introduce in subsequent articles from our Route 66 journey. It was a little surreal to walk up to the station and see the vehicles sitting there. While most of us adults recognized them, there was one younger girl (Think grade school age) who lit up like Christmas when she spied them. Being grandparents, we could just imagine our grandkids having a similar reaction. We even felt compelled to take a photo with this local celebrity. More cars on the Route

It seemed that this town was filled with lots of cars from the yesteryear. We didn’t have the chance to see Sarge, the jeep, but were told that it is a vehicle owned by another town resident. It is easy to see all of the similarities to the movie. It becomes apparent when you think of the impact that building an interstate highway from Miami, Oklahoma to Springfield, Missouri had on this overlooked area. In some ways it almost feels like time has stood still for these small towns, which adds to their charm. Fast-Forward to the Past

These days Cars on the Route is a Route 66 landmark that draws travelers from throughout the nation and worldwide. Each year thousands explore the route looking for nostalgic landmarks, ghost signs, and collectibles. At this local stop visitors can; purchase Route 66 items, mementos from the Cars movies, (Some made by local artists) and even grab a meal or snack. Their iconic boom-truck still runs, and is often rented out for appearances at events. It appears that things have improved on America’s Main Street, and Route 66 has seen a pleasing revival. Why not make your own plans to visit a piece of this American byway, even if it’s just a slice of the 2448 mile long drive. Might we suggest starting in Galena, Kansas?