Get Up Close At Dickerson Park Zoo

Get Up Close At Dickerson Park Zoo

The Dickerson Park Zoo, in Springfield, Missouri, faces the same struggles that many zoological parks are facing these days. With the number and variety of competing attractions increasing, the travelers options become larger. Zoos, as well as many museums, face stiff competition for tourism dollars. This doesn’t mean that smaller market zoos don’t still have the desire to make groundbreaking improvements. They simply have to temper their desire with reality, and get the best bang for their buck.

We want to thank the Dickerson Park Zoo for their hospitality. Rest assured that all opinions are our own. 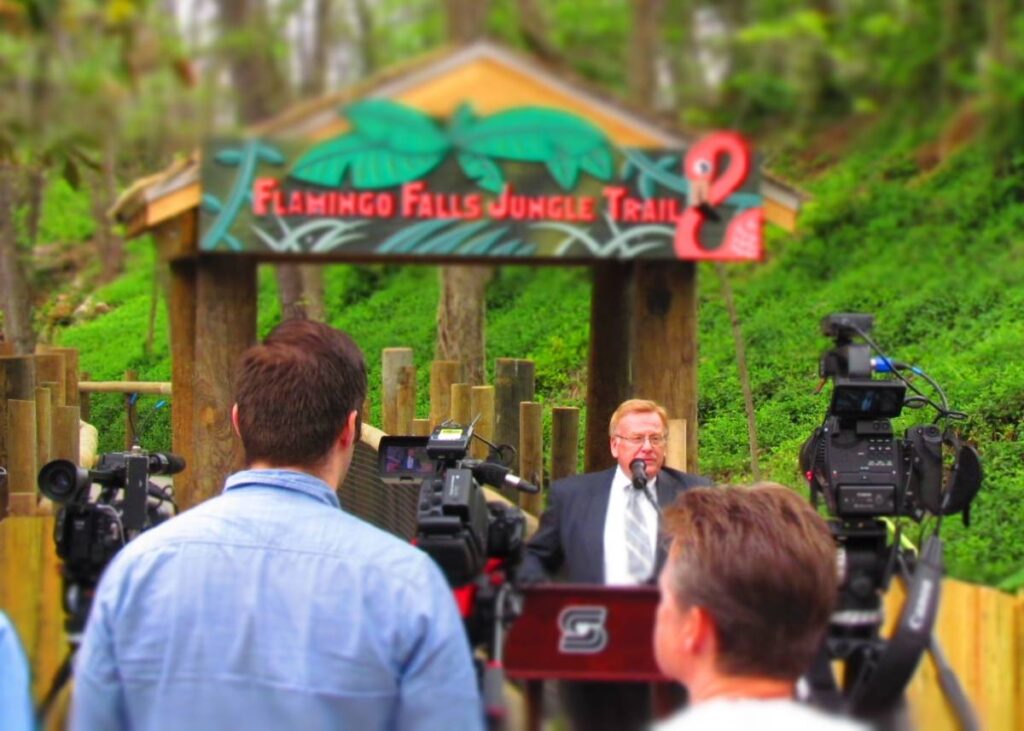 When we planned our research trip to Springfield, we had no idea that the Dickerson Park Zoo would be hosting a celebration. It was a coincidence that our arrival landed on the day of the ribbon-cutting for a refurbished area. The South America Boardwalk had been need of repairs for some time, and they are finally completed. When you are a public attraction, like a zoo, you need to take every opportunity to showcase your improvements. Fortunately, the weather and the crowds all proved to be positive for the event. We even had the honor of visiting with their newly elected mayor, prior to his ceremonial speech. 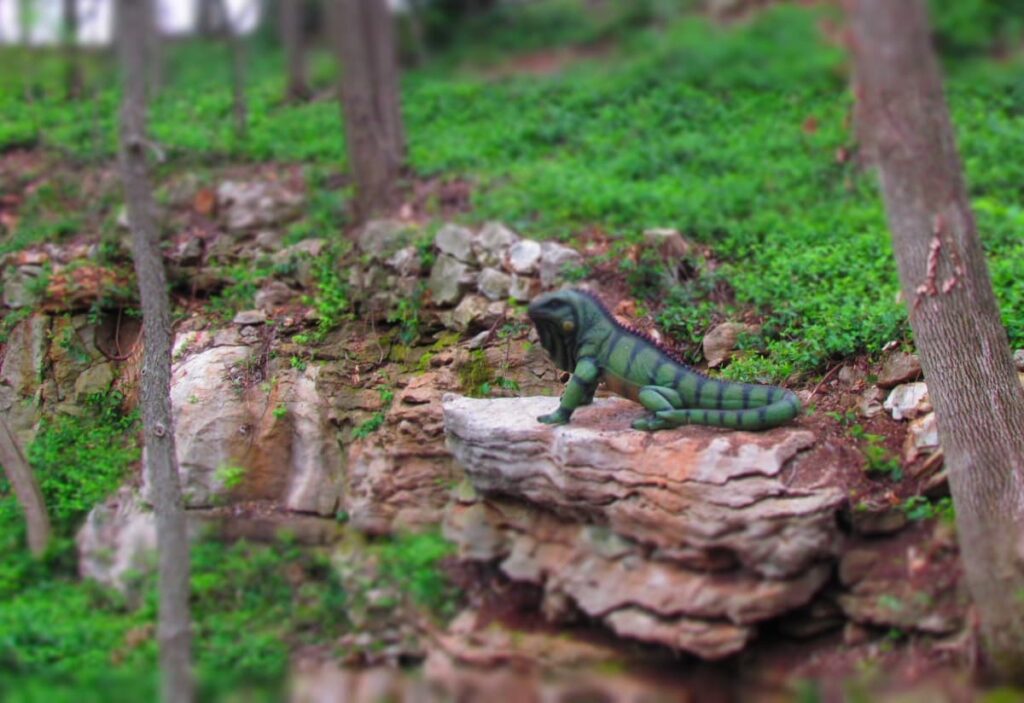 After the ribbon was cut, the public was invited to stroll the new feature. The elevated walkway winds its way over a water feature. The landscape holds new artwork nestled among the rock outcroppings. A variety of waterfowl swim around the koi filled lagoon, which the boardwalk overlooks. The walk ends at the South American bird and primate area. This revitalization project has allowed the zoo to bring the animals back into the limelight. It was obvious that the staff was excited to see this work completed. Many of the animals also seemed pleased to be back in full public view. Of course, it could have also been the beautiful weather that day. 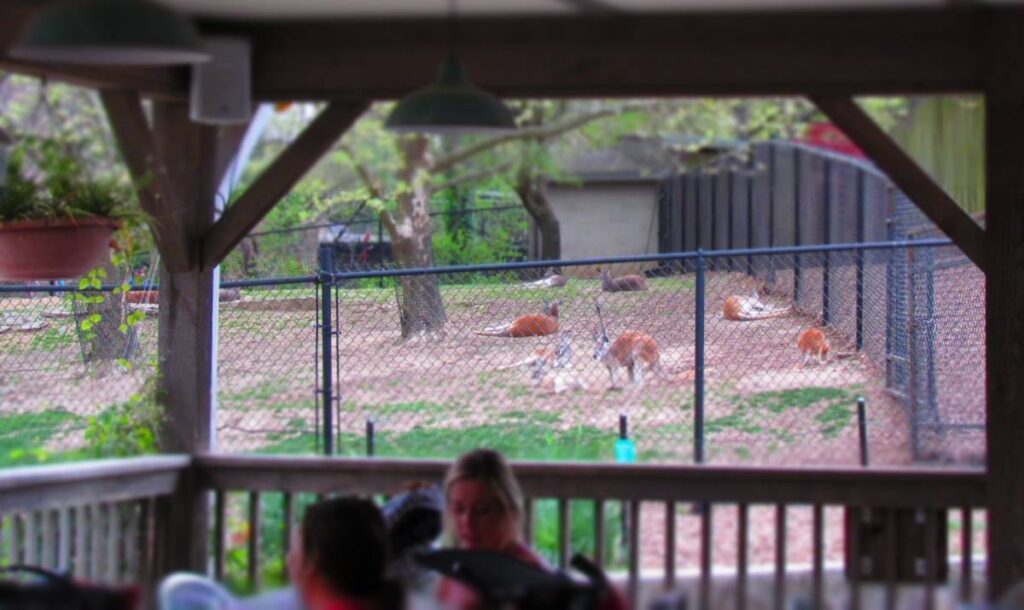 Our tour guide for the morning was Joey Powell, who is the head of Public Relations. Her enthusiasm for the job was evident from the moment we met her. We watched her scurry around before, during, and after the ribbon cutting, and waited at the cafe while she completed her duties. We noted that the cafe has plenty of open air seating, which provides great views of various animal exhibits. Later in the day, as we enjoyed our lunch, we watched the ostriches parade around their enclosure, and the kangaroos lounge during their midday rest. We found the ability to survey the animals while on our downtime break to be an added bonus. The zoo has certainly worked hard to keep the visitors engaged with the exhibits. 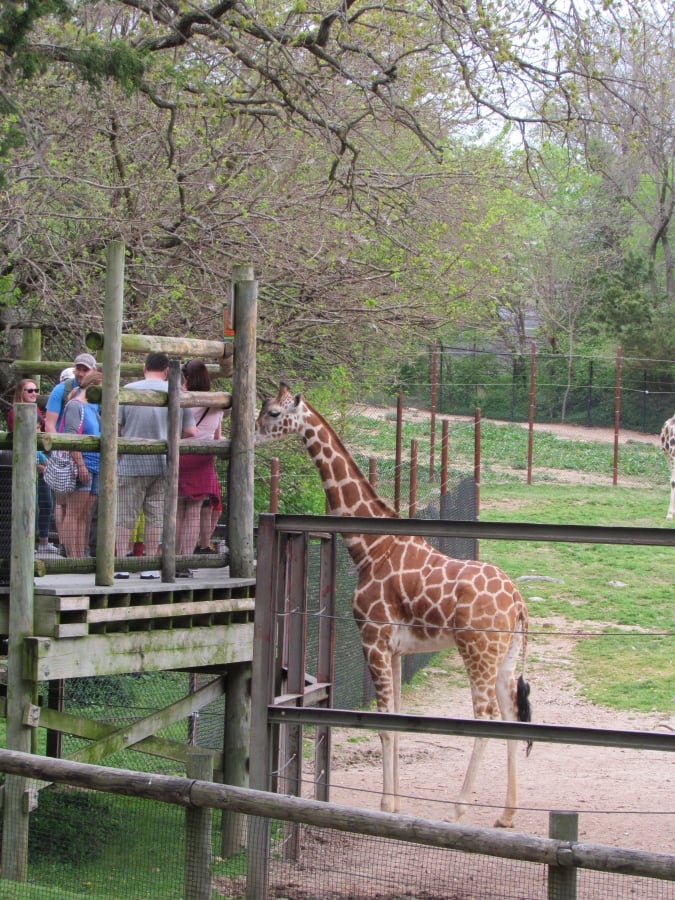 After Joey had bid goodbye to the local dignitaries, we began our tour. As we walked, she shared the history of the zoo, and we discussed some of it’s best features. The Dickerson Zoo is a mid-sized park, which got its start in the 1920’s. The zoo stayed small until the mid 1970’s, when a local Friends of the Zoo was formed. Since that time, Dickerson Zoo has continued along its master plan, and maintained its accreditation. In 1996 a newly revised master plan was implemented. The goals of this plan were completed by 2010, so steps were taken to project the future vision of the zoo. This latest strategic plan will help guide the zoo on its journey to be a leisure destination, as well as an educational resource for species preservation. 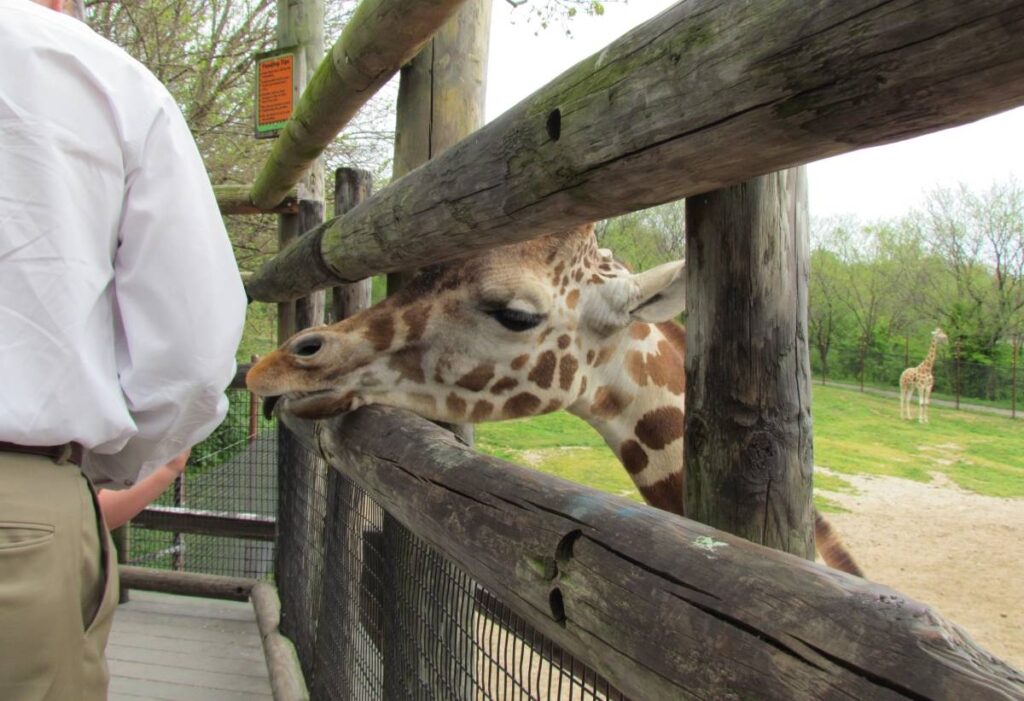 Our first stop was at the giraffe area, which includes an opportunity to feed them. For a small fee, visitors can purchase special crackers to feed the giraffes.This seemed to be a very popular attraction, and people of all ages lined up for their turn. The giraffes are free to roam their enclosure, and seem to take turns visiting the feeding station. During our visit to the stand, one adult seemed famished. Of course, soon another arrived, and the first one headed off. 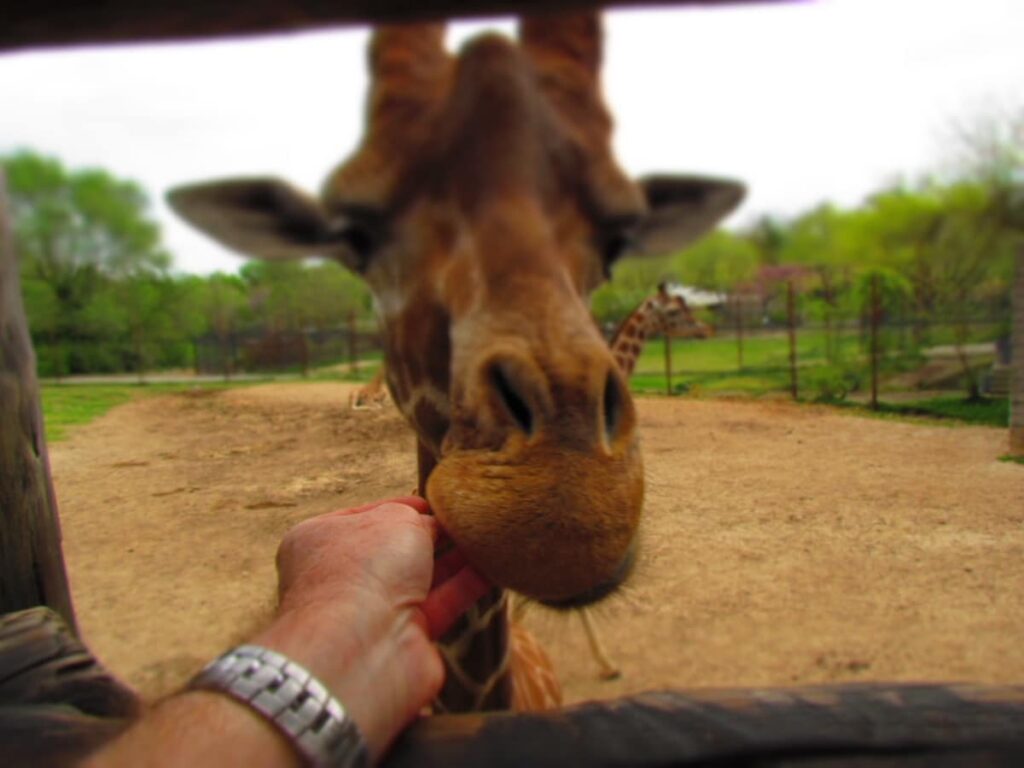 Crystal took her turn feeding, and seemed a little surprised at their slimy, dark tongue. I have had the pleasure of feeding giraffes in the past, and knew what to expect. Even with my previous experiences, it is still an amazing opportunity, when you get to feed one of these magnificent creatures. This is certainly one stop you don’t want to pass up during your visit. 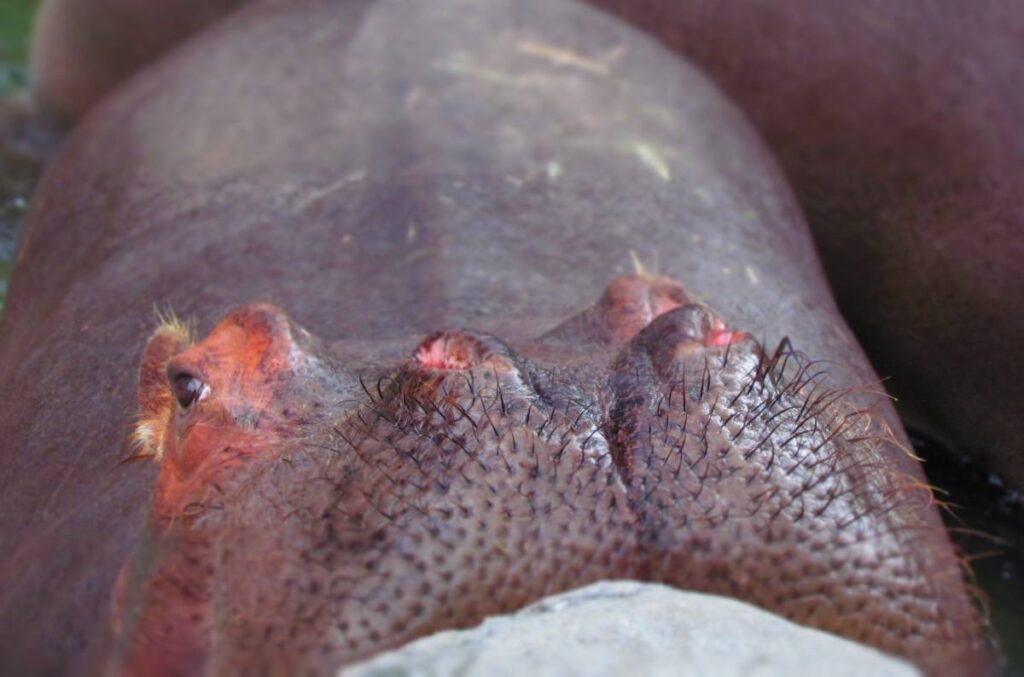 Our next stop was to see the hippos. We were in for a special treat, as Joey took us for an up-close view. Of course, since we approached at the point that they get fed, they were expecting food. After a few moments of waiting with open mouths, they gave us the look of disappointment. It was quite exhilarating to get such a birds eye view of these river horses. 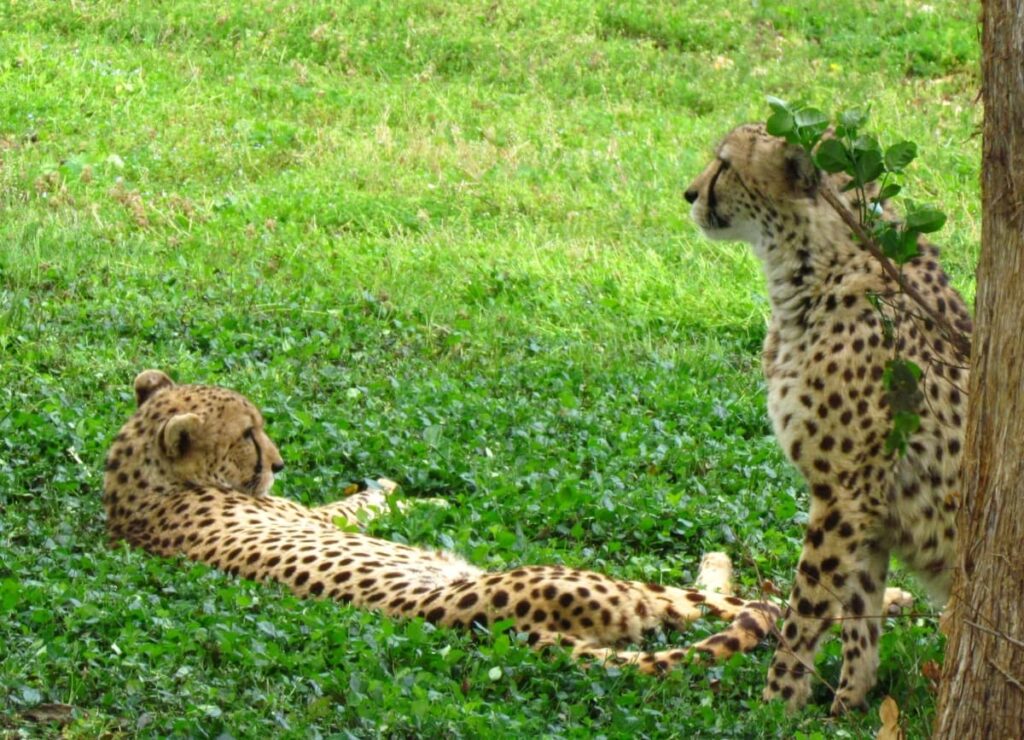 We continued on deeper into the zoo. We passed more primates, as well as some of the cats. The cheetahs lounged in the shade, but we kept moving toward the back of the zoo. We were on a mission to visit an area that makes the Dickerson Park Zoo stand out from many of the others its size. 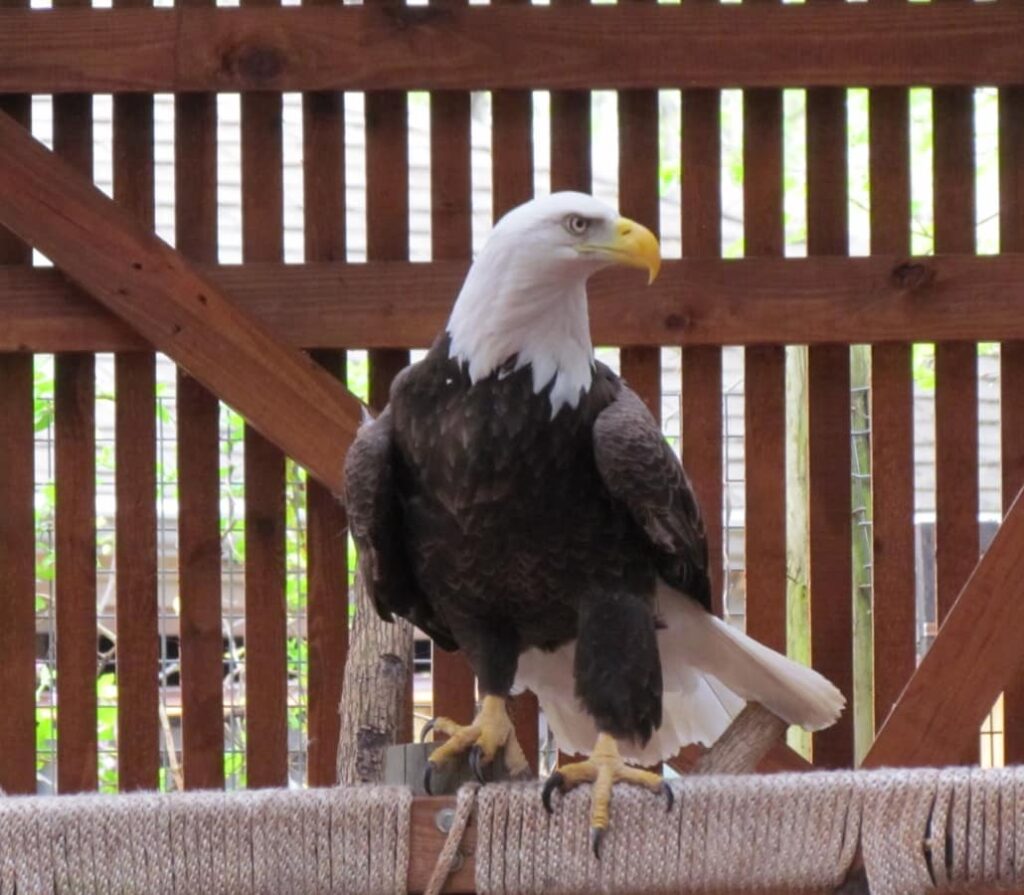 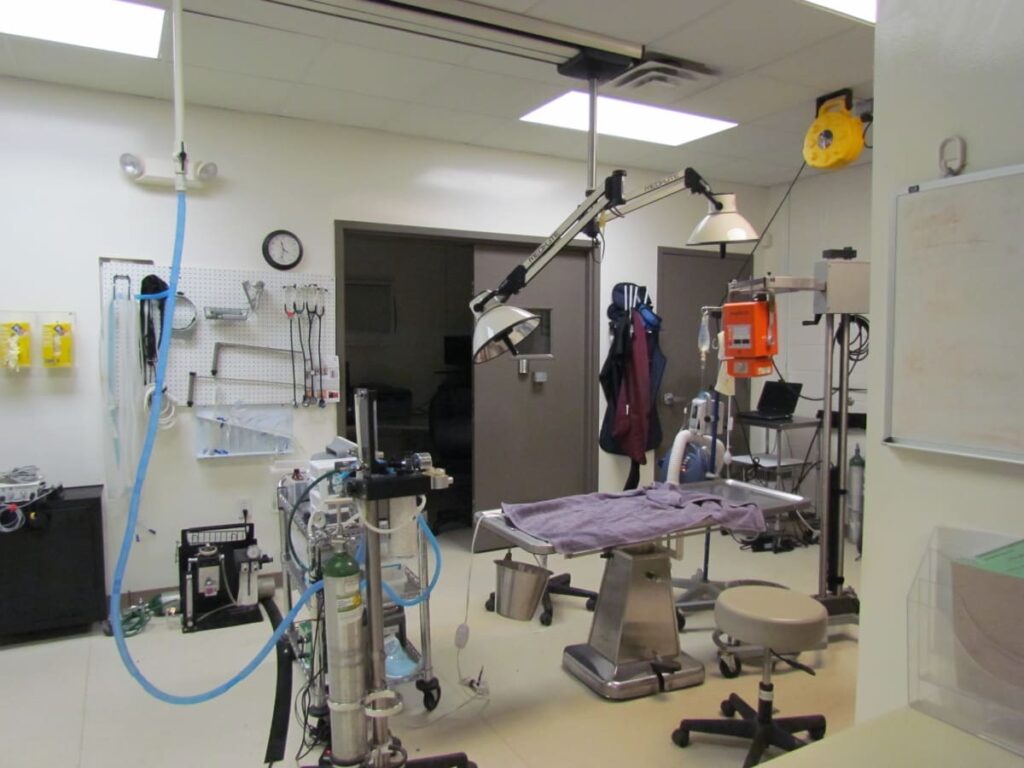 Occasionally an animal will need more intensive care. The zoo is equipped with a complete surgery center to help with those extreme situations. We had a chance to meet one of the staff in this area, and it was evident that they have a true dedication to the animals. In all actuality, every staff member we met seemed proud to be a part of the zoo family. They truly care about the well being of the creatures in their care. 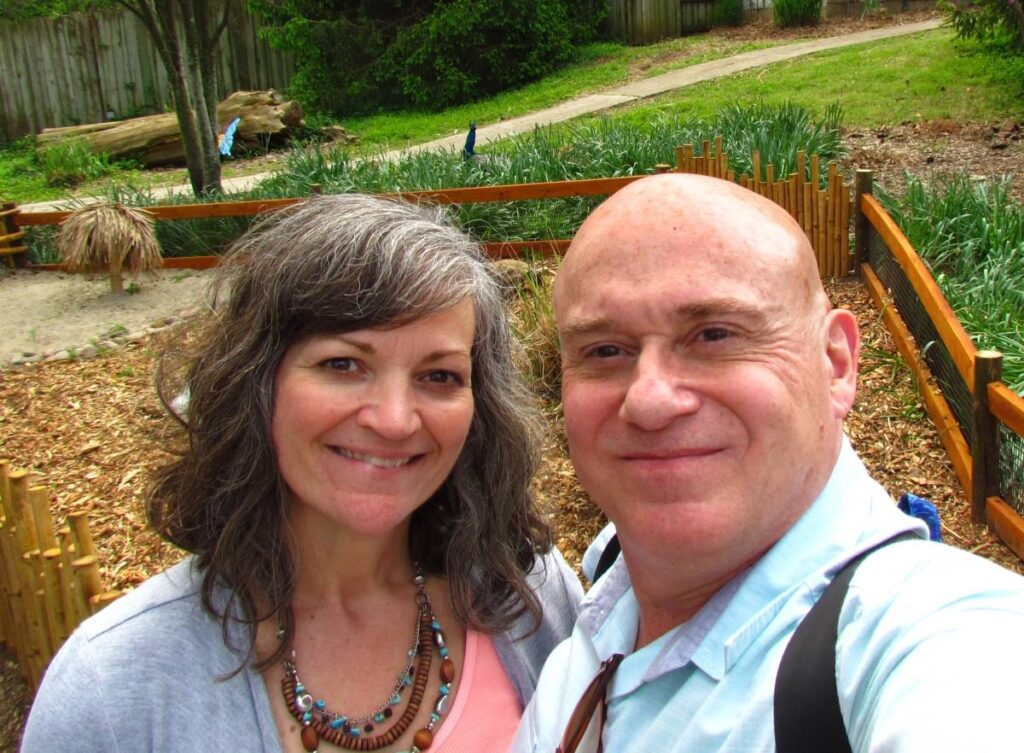 After our tour, we spent time walking around the park. There five distinct zones in the park, as well as a few additional exhibits. The entire zoo can be seen in two or three hours, but we found no reason to rush. Exhibits are designed to allow good viewing for all ages. The Dickerson Park Zoo also has a cafe, gift shop, and a miniature train. This family friendly attraction is a great place to while away a few enjoyable hours.