There is a huge variation between cities in the Midwest. There are lots of small towns, which are based around the old town square format. As you move up to larger cities, you start to see more multi-story buildings. Then you have the Chicago skyscrapers. By the time you get to a city the size of St. Louis or Kansas City, you will find a smattering of skyscrapers dotting the horizon.  While there are similarities between Kansas City and Chicago, there are just as many differences. The one sight in Chicago, that constantly reminded us that we were not in our hometown, was the large saturation of skyscrapers.

Towers of Steel and Glass

Now if you ask just about any Chicago resident, many will tell you that the first Chicago skyscraper was built in their town. Once the first one was completed they must have just kept right on going. We were awestruck with the number of times the sun was blocked at midday by the enormous buildings. Now the entire city is not just a bunch of high rises, as there are many areas that could easily be mistaken for just about any other Midwest city. When you get closer to the downtown sections is where you find the highest concentration.

When you visit one of these skyscrapers you get a view that adds a new perspective to the height. Standing in their shadow you must crane your head to see the upper floors. All around, the towers climb toward the clouds. The buildings seem to race skyward competing to see which can go farthest. The skyline is dominated by them, as we discovered on our walk to the Navy Pier.

We had the opportunity to visit the Willis Tower, which used to be known as the Sears Tower. The observation deck is on the 100th floor, and from here everything seems diminutive. From the upper floors you are able to look out and see a sight not found in most Midwest cities. Even nearby buildings, that tower dozens of stories over the nearby streets, look small from this angle. 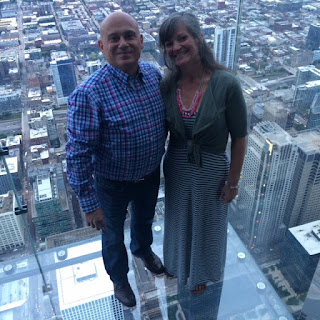 The Sky-deck, at Willis Tower, is an area that allows visitors to step out into a glass box, which is suspended about 1350 feet above the sidewalk below. While it can be a little unsettling to prepare yourself for the experience, the pace created by the never ending crowd limits the amount of time you have to think about what you are doing. In the end you feel victorious for participating, but realize that you didn’t really spend much time in a precarious position.

By the end of our visit we discovered that one of the most beautiful things about the Chicago skyscraper experience was the night skyline. The buildings fill the sky, twinkling like mountains covered in light. In the valleys created by these gigantic structures life went on as normal. Crowds scurrying from location to location, without a second thought about the architectural amazement surrounding them. Of course there are still us tourists just caught in amazement.