Kansas burst into the Union in an unusually bloody fashion. Human presence can be traced back to at least the 1400s. It would be the mid-1800s that saw the quick escalation of violence. The story of Bloody Kansas has been told many times, but we find each site sheds a little more perspective. The Johnson County Museum, at 8788 Metcalf Avenue, is a good resource for learning about the changing times that make up our state’s history. We dropped by for a refresher course on how Kansas transitioned to its current state. 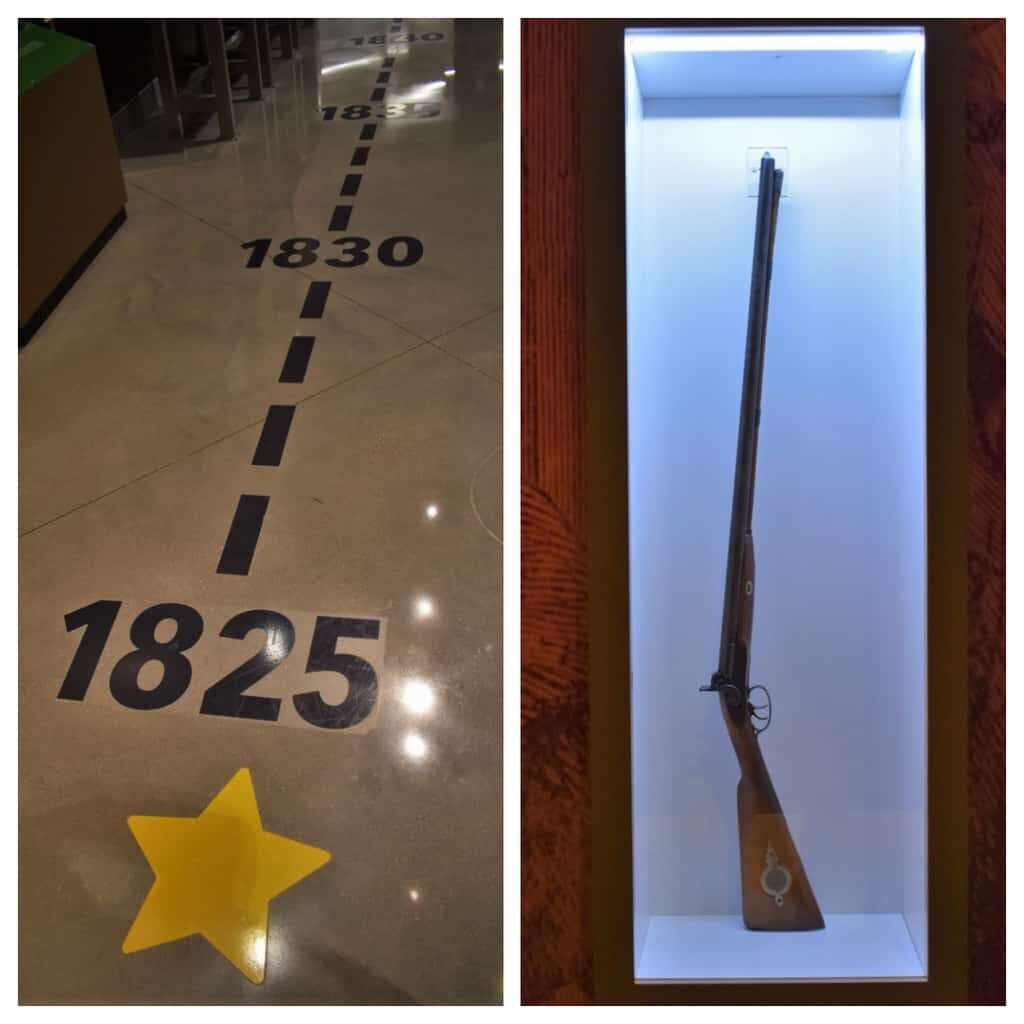 Johnson County was one of the first areas established in the Kansas Territory. Originally part of the Osage Indian lands, it was made a portion of the Shawnee Indian Reservation, after their removal from the east. In 1839, the Shawnee Methodist Mission was founded by Thomas Johnson, from whom the county name was derived. The mission would serve as the state capitol for a short time, during 1855-1856. Reverend Johnson was a slave owner, and strongly sided with the pro-slavery group during the years leading up to the Civil War. Even though treaties were in place, illegal squatters were pushing into Indian territory. This would lead to them being forced to relocate once again, but southward to Oklahoma territory. With the American Indian Tribes pushed out of the way, the land was primed for settlers. The Kansas-Nebraska Act of 1854 defined the border between these two new territories. At the same time, the act allowed the residents of the territory to vote on the matter of slavery. This would almost immediately begin a rush from both sides to stack the deck. The eastern edge of Kansas was rife with conflict before and during the Civil War. Abolitionists and pro-slavery advocates sparred back and forth across the state divide. Many of the skirmishes would escalate into guerrilla attacks or even mass raids. The term “Bleeding Kansas” was used to describe the period leading up to the vote on whether slavery would be allowed in the new state. Many people are aware of Quantrill’s raid on Lawrence, but he also conducted raids on Spring Hill and Olathe. Local businesses were destroyed and multiple lives were lost. The abolition side had James Henry Lane, a man who used similar tactics during strikes in Missouri on pro-slavery soil. One particular event occurred in Osceola, Missouri, and many believe this became the impetus for Quantrill’s attack on Lawrence. Stuck in the Middle

The Civil War is often pictured primarily taking place in the eastern portion of the nation. In reality, the changing times, brought on by the war, came early to this region. It even stayed well beyond the Southern surrender. The malice that was dealt out from both sides would create lasting wounds that were difficult to heal. Well over 1000 battles and skirmishes occurred in the Kansas-Missouri area. While the border region only saw a portion, many of these were especially brutal. It would take decades for the anger to cool down. In the meantime, Johnson County’s population would flounder until the 1900s. The start of the new century found plans being developed that would forever alter the future of this county. In 1914, developer J.C. Nichols built the Mission Hills Country Club to attract influential residents to leave Kansas City, Missouri. Moderate growth continued in Johnson County until the start of World War II. In 1941, the Sunflower Ordnance Works was constructed near Desoto, which is on the western side of Johnson County. At the time, it was the world’s largest smokeless powder plant. During World War II the plant, under the direction of the Hercules Powder Company, would produce over 200 million pounds of material. It was also one of the largest employers around, with a payroll of over 12,000 at its peak. After the war ended, the plant was placed on standby but saw renewed activity during the Korean and Vietnam Wars. There’s a House in Here!

The Johnson County Museum hosts a nice collection of artifacts from the various stages of the county’s history. To give a perspective of the increased size of their new facility, the 1950s All-Electric House has been moved inside of the complex. We enjoy looking at all of the “futuristic” amenities that were showcased in those days. It’s no wonder that so many were flocking to the new subdivisions. As we made our way through the house, we noticed displays of everyday items that are still produced today, although the packaging has changed a little. After World War II ended, a flood of veterans returned to the Kansas City metro. With a renewed need for housing, development in Johnson County exploded. Newly constructed highways allowed easier access to the rural areas. The Supreme Court ruling of Brown vs. Board of Education put an end to school segregation. This created a sudden exodus, of primarily white families, from the urban core. The pace of this migration continued to increase through the 1980s. Between 1990 and 2010, Johnson County saw an increase of 10,000 residents per decade. It quickly became the most heavily populated county in the state of Kansas. Every visit brings back memories from our past. The museum has a collection of games and toys from the 1950s and 60s. While some are unfamiliar to us, there are plenty that we remember. It’s these kinds of artifacts that help connect visitors to the past. Seeing these colorful memories reminded us of the changing times that continue to pass by. We love that museums can help remind us of those days in the past. 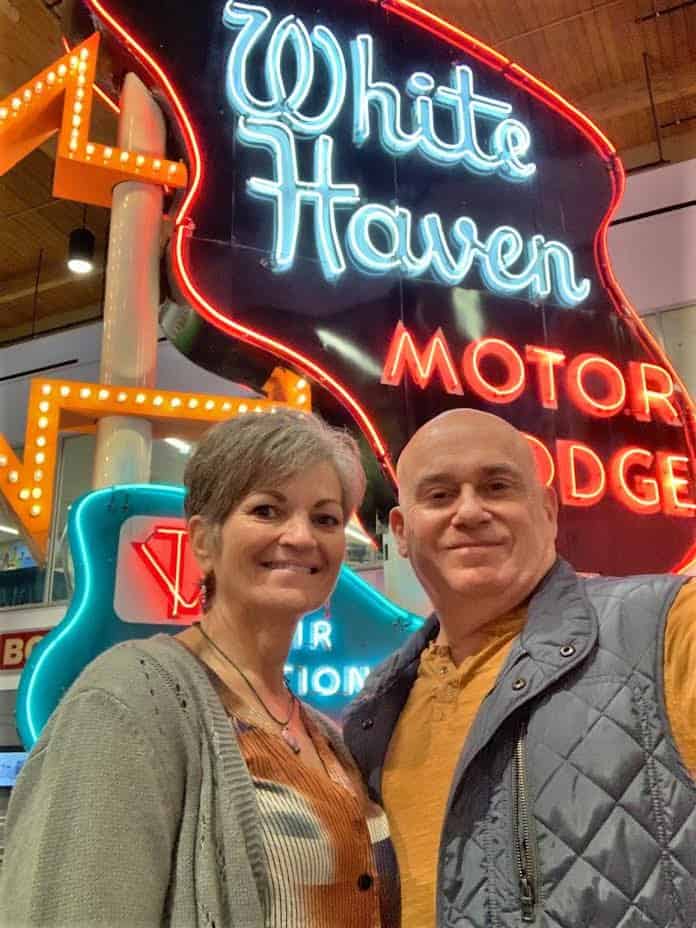 In one corner of the museum, we found the old White Haven Motor Lodge sign. This “motel” was located on Metcalf Avenue from 1957 until 2010. It sat on what was a dairy farm, prior to the new development by Hugh and Mary White. The first phase of the development was creating the White Haven subdivision, which runs from Metcalf to Lamar and from 83rd to 87th Streets. The motel retained its classic 1950s style, so popular with customers. Once again, the Johnson County Museum entertained us with more KC history. The changing times in Kansas City include many positives and negatives. In the end, it’s important to learn from our past.