No matter where we wander, we seem to always find a good burger. It goes to show just how widespread this staple of American dining has become. During a trip to Quebec City, in Canada, we dropped by Le Chic Shack to sample their creative take on this handheld creation. Building the perfect burger requires attention to detail and this restaurant takes the challenge seriously. It became apparent that dining in Canada’s first city was going to be a gastronomical extravaganza.

We want to thank Quebec City Tourism for hosting our visit. Rest assured all opinions are our own. Exploring Old Quebec City means that we were spending lots of time behind the walls of the original town. Since our mode of travel was on foot, we knew we would be burning off plenty of calories. This meant we could indulge in the delectable culinary treasures that are found all around the city. After a visit to the Musee Du Fort, we were ready for lunch. Fortunately, Le Chic Shack is right around the corner. We mean literally in the same building. Talk about convenience. 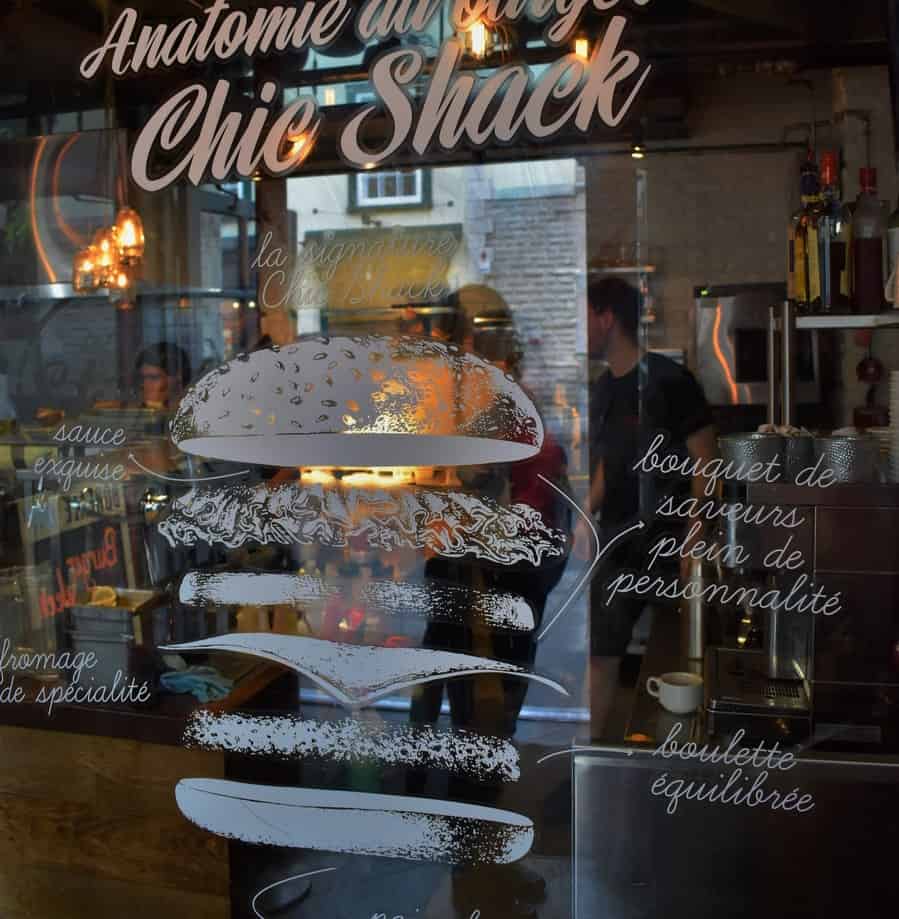 If you plan on building the perfect burger, it’s important to have a blueprint for success. We were discovering that a majority of restaurants in Quebec City utilize standard practices that are frequently found in French cooking. This includes attention to detail that far surpasses the backyard grilling, which produces so many burger meals in America. Here they plan out the assembly down to the finest detail. We were sure this would produce results that would be memorable. When the menus were handed out, we were surprised to see that there was a reasonably manageable number of items to choose from. Many restaurants will bombard customers with a plethora of choices, yet often fail to deliver on the basics. Not at Le Chic Shack. Here they have honed the menu to include four major entree groups. Building the perfect burger comes first, but guests can add to their meal with chips, salads, or one of their popular poutines. Since we had experienced our first poutine the previous evening, we decided to stay the course with burgers. Even then we had to choose between beef, chicken, venison, or a veggie patty. Crystal decided to keep it simple by ordering the basic burger, which they call Le Chic. A juicy beef patty is nestled on a fresh tomato slice and topped with maple-smoked bacon, lettuce, pickles, cheddar cheese, and their housemade Chic Sauce. It’s important to note that they use fresh ingredients that are sourced locally to ensure the highest quality. While this may sound like a standard burger, it is created in a fashion that will appease even the pickiest burger aficionado. For her side, Crystal chose the Sweet Potato Fries, which makes a good accompaniment for their burgers. At this restaurant, you can’t have Chic without Shack, so I selected Le Shack. Using the same high-quality beef patty as a base, they toss on some red-ale braised beef for extra heartiness. These are topped with Cantonnier cheese, which supplies a nutty twist that includes a fruity-flavored base. Building a perfect burger means adding complex layers of flavor, and Le Chic Shack has this nailed down. Adding Horseradish aioli and Chic Sauce packs on an additional burst of flavors. When I selected their Homemade Chips as a side dish, I didn’t realize it came with a maple syrup drizzle. I should have known that there had to be some way to incorporate the national flavor into our meal. We were less than 24 hours into our Quebec City visit and we had already consumed three amazing meals. It was obvious that the local attractions would be challenged to match the memorable dishes that we would certainly find in Canada’s original city. We were confident that no matter where our hunger led us, we would find incredible foods. This means we could focus on just enjoying our time in this historic city and rest assured our meals would all be magnificent. For now, it was time to go walk off some of those calories and prepare for our next meal.