What is a person to do if they find themselves desiring authentic Louisiana cuisine in St. Joseph, Missouri. Fear not, as you can stop in Boudreaux’s Louisiana Seafood and Steakhouse for some Cajun and Creole dishes served up in a relaxed atmosphere. Located in the Wholesale Row Historic District, this restaurant has created a Mardi Gras atmosphere. The original owner, Robert Boudreaux was a Cajun who hailed from Opelousas, Louisiana. 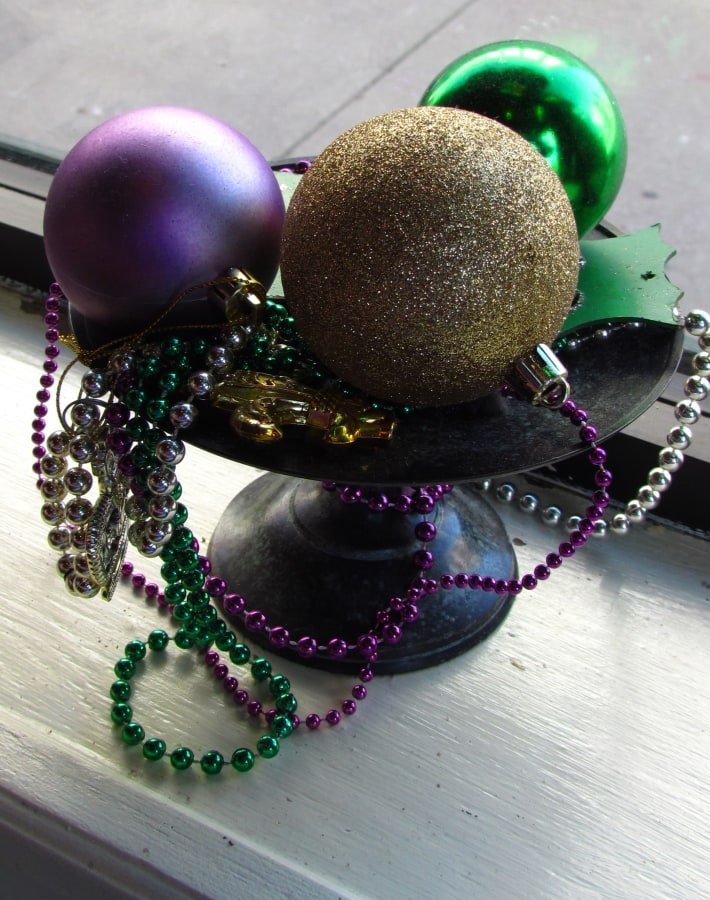 Upon entering, you see that the décor is a mixture of antebellum architecture meets spring break party. All of this tempered with a French flair. 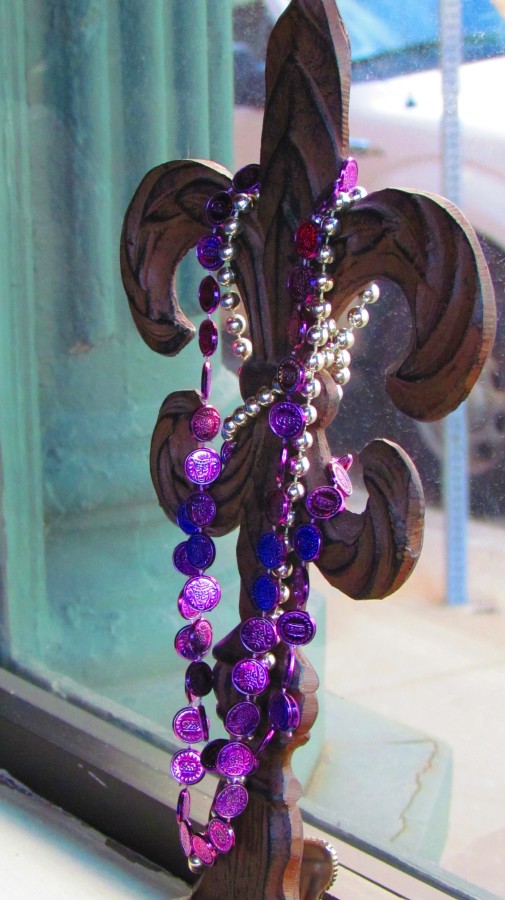 Boudreaux’s Louisiana Seafood attracts a wide variety of clientele. During our lunch visit we saw business people, construction workers, tourists (obviously we fall in that category), and lots of locals. Even though it was fairly busy, service was not lacking. After a short discussion with our server about their specialties, we placed our orders. 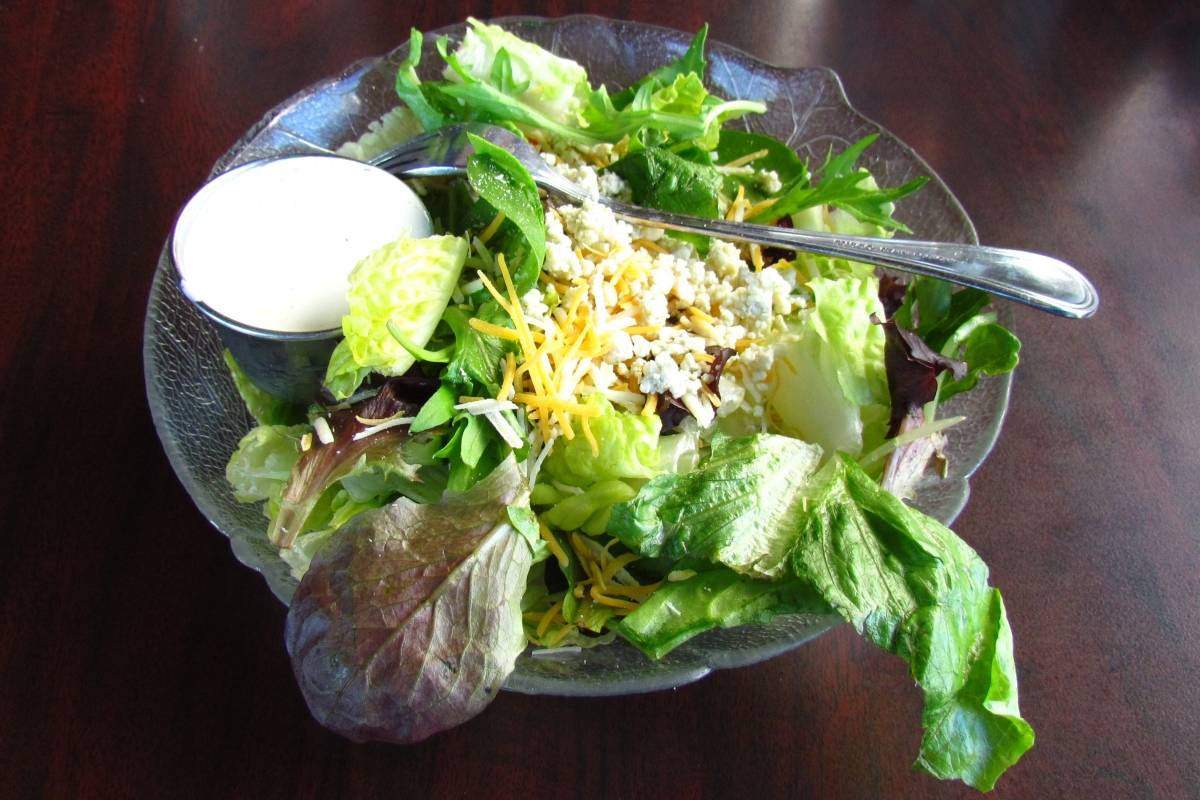 We began our meal with side salads, which are made with a mixture of fresh greens. A few assorted vegetables, like mushrooms, cucumbers, and cherry tomatoes will be found as you work your way down. The entire thing is topped with shredded Colby and blue cheese crumbles. 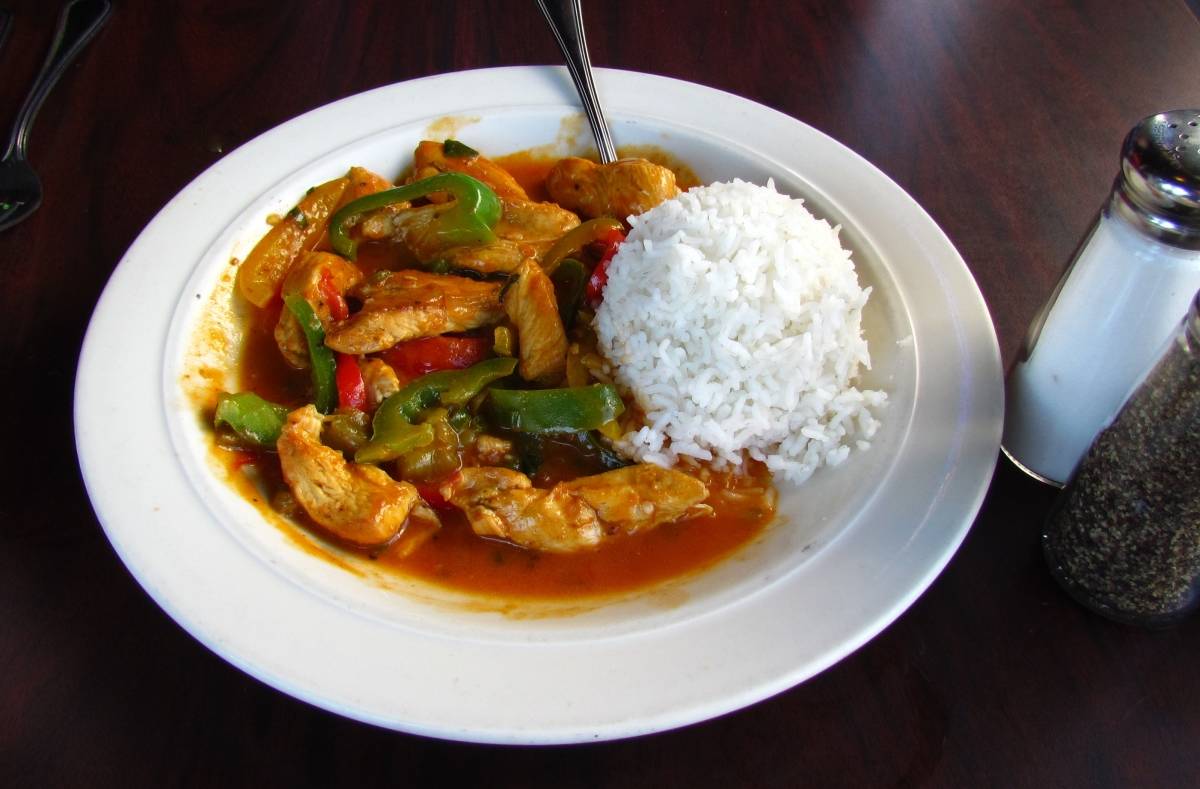 Crystal chose the Chicken Creole, which is accompanied with steamed rice. The tomato based sauce has a slight kick. The addition of onions and peppers compliment the dish. 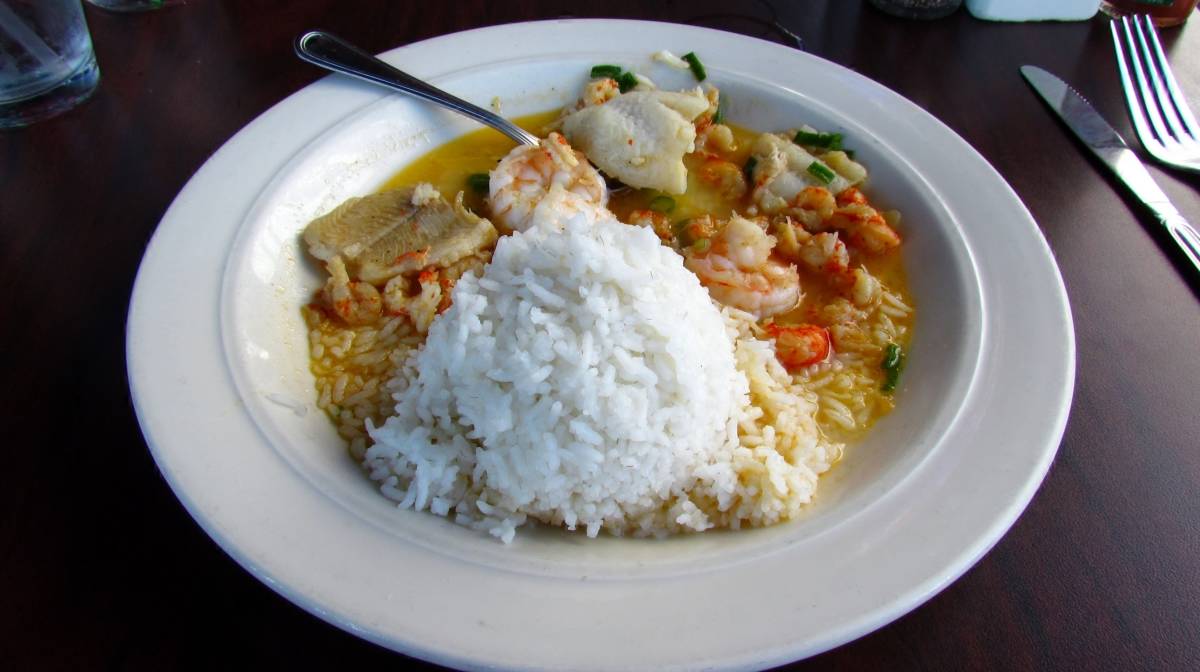 Since she had chosen a land based entrée, I decided to sample the seafood. My order of Seafood Sauté included shrimp, crawfish, and catfish filets. All of these are sautéed in a white wine and butter reduction, and served with steamed rice. The sauce was light and allowed the seafood flavors to peek through. 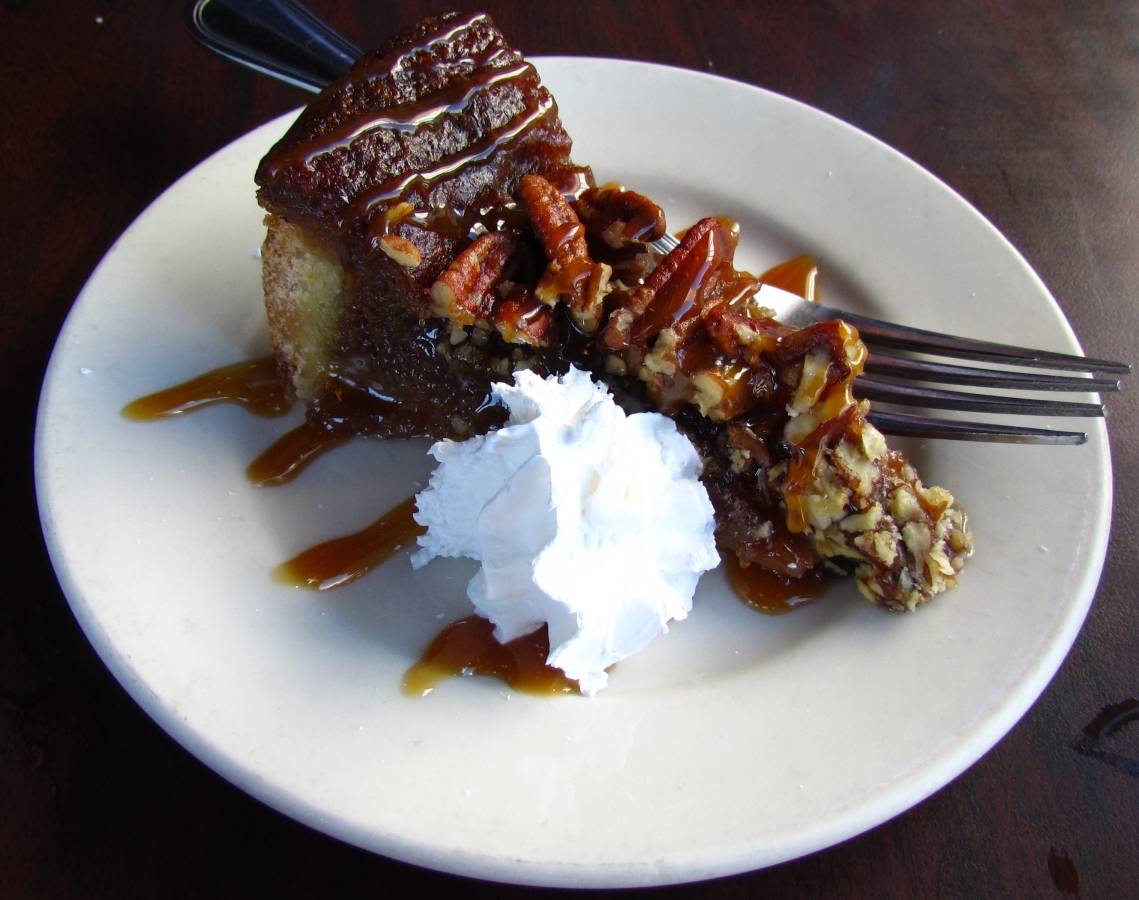 The entrees were large enough to be quite filling, so we only finished them partially. We had seen the dessert specials listed on their easel, and had our hearts, and stomachs, set on trying them. First up was the Bourbon Pecan Pie, which has the texture of a dense cake versus the normal pecan pie filling. Drizzled with caramel sauce it was absolutely delicious. 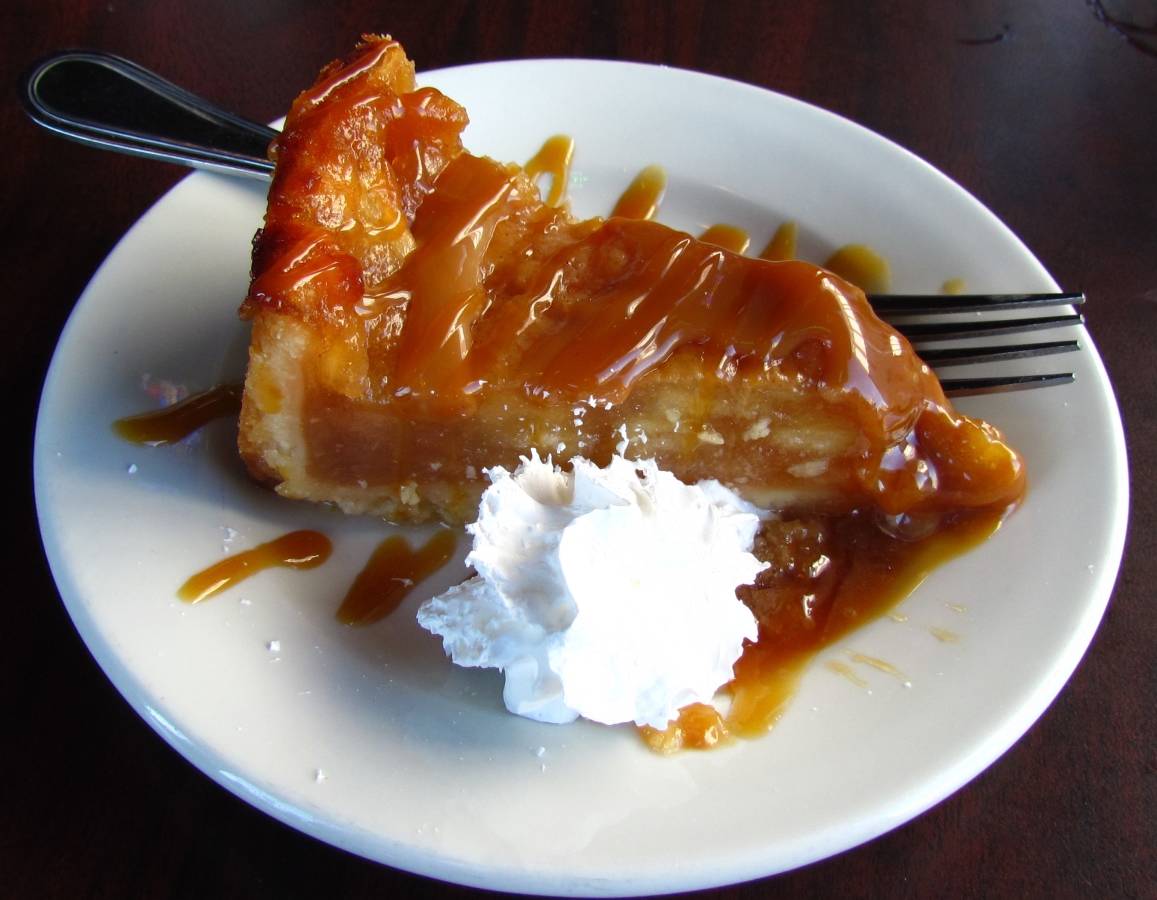 We were sure nothing could compete with that treat, until we tasted the Caramel Apple Pie. Loaded with slices of apple, and drizzled with the same caramel sauce, this dessert is hard to resist. In no time both slices were devoured, and we were completely satisfied with our visit. Boudreaux’s Louisiana Seafood and Steakhouse is certainly a must try for any Cajun food lovers who are in the St. Joe area.