Big Fun at The National Toys and Miniatures Museum

Big Fun at The National Toys and Miniatures Museum

For quite some time we have meant to visit The National Museum of Toys and Miniatures. This Kansas City attraction, located at 5235 Oak Street, has been a mainstay for visitors and travelers since 1982. The Toys and Miniatures Museum of Kansas City started small, at barely 7000 square feet. The two full time employees watched over an ever expanding collection. Over the next 30 years, the museum grew to 33,000 square feet. This expansion was necessary to house the collection that had swollen to over 72,000 pieces. After a successful public campaign in 2012, the museum was able to complete a massive renovation by mid-2015. This has allowed the National Toys and Miniatures Museum to display more of its collection, which now numbers closer to 300,000 pieces. Guests start their visit on the main floor, which houses the miniatures collection. Here we found a wide array of displays. Some were small dioramas, which are inset into the walls. Others are on a grander scale, and include complete houses filled with miniatures of all sorts. The museum is housed in an Italian style 38 room mansion. This makes the layout a little odd, and we found ourselves retracing some of our steps. We didn’t mind, because it seemed like we had missed things on our first trip. 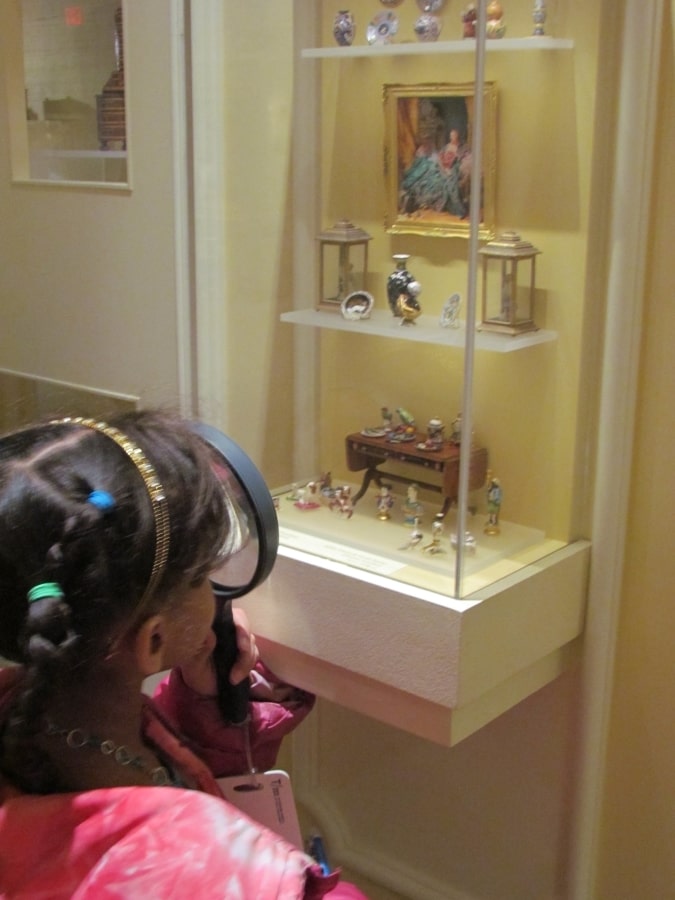 On this particular day we had two of our grandkids with us, and they were as fascinated as we were with the intricate details. The museum stocks over-sized magnifying glasses for patrons to use. These come in handy when looking at items less than an inch tall. The kids were leading us around, and showing us the amazing creations that they discovered. The attention to detail in items so small was astounding. A large part of our conversation, and that of those around us, was wonderment of how they were created. As the pictures show, the amount of subject matter was massive. The displays and dioramas cover just about every style period. Tools, weapons, Native American head-dresses, and just about everything else imaginable has been created in miniature. We worked our way further into the displays, and came upon an area that helped explain some of the magic. Here we found videos showing how a miniature painting is produced. Exhibits detailed the intricate work required to create a single piece. An exploded view of a cabinet displays many of the same woodworking skills required to build larger versions of these pieces. Clearly the masters who produced these had steadier hands and more patience than I do. Upward To The Toys

We saw the grandkids starting to finally tire of the miniatures, since they knew there were toys upstairs. I was kind of shocked at how long they spent on the main floor. The National Toys and Miniatures Museum was certainly ending up well worth the $5.00 per person admission price. Once upstairs we found just as much to see as on the main level. The sheer amount of nostalgia was almost tear producing. While the grandkids were unfamiliar with a large amount of the items, we were reminiscing. We made our way through the rooms filled with display cases. Toys from every genre and era were included. Do you remember your easy bake Oven? They had one on display. They have science kits that contained chemicals we wouldn’t be allowed to carry on an airplane today. Baby dolls to erector sets, and just about everything in between is on display. The museum boasts an impressive collection of marbles, as well. The only thing that would have made our visit better, was to have been able to play with the toys. We worked our way down a long hall, and came to an area that made our grandson a little more excited. Here we found toys from more recent campaigns. Star Wars collectibles join various video game consoles representing the latest progression of toys. Of course, we would still prefer the old school toys, but then again the grandkids probably consider us old. In this area we also found a couple of displays that showed more details of toy manufacturing. One interactive display allowed guests to select one of a few toys, and see the parts required to assemble the finished product. A video highlighted the steps taken at the manufacturing plant. Judging from our grandson’s reaction, this was a little more interesting to me than him. We neared the end of these displays, and prepared to enter the area that is used for traveling exhibits. The current exhibit focusses on the variety of toys that have been associated with The Wizard of Oz. The displays hold a selection of memorabilia from the movie, as well as items that were created to help market it. It was quite an impressive collection, and contains many pieces with which we were unfamiliar. The exhibit also featured items based on some of the other Frank Baum books. This particular exhibit will run until late August, before being replaced with another fascinating showcase. We soon realized that we had been at the National Toys and Miniatures Museum for a couple of hours, and hunger was starting to creep up on us. It was time to head off in search of lunch, but we made note to make a return visit in the near future.