One of the “must see” places on our Philadelphia list was the Reading Terminal Market. The history of Philadelphia markets go back to around 1680, when they were located close to the Delaware River. The Reading Market of today was erected in the 1890’s, and remains a popular dining spot. It Smells So Good

Our first visit was at breakfast time one morning. We expected huge crowds (We had heard rumors), but found the place fairly vacant upon entering. The entrance we used deposited near a stall selling baked goods. The fresh baking was a heavenly smell, and certainly added to our hunger. It was time to find a place to eat. When in doubt, we know to ask a local police officer for recommendations. We were directed towards the Dutch Eating Place. The Reading Market is filled with a variety of restaurants, as well as about any other food related items available. One corner of the market is predominantly Pennsylvania Dutch businesses, which have a real knack for food preparation.  We found a couple of open stools at the counter, and also found where the crowd was at. The two stools we found were the only ones open, but that was just fine for us. Crystal had oatmeal, but I wanted to sample their apple French toast. Boy was it a good choice! Just the right amount of sweetness without being overpowering. We finished our breakfast, and took a quick walk around to get our bearings. Our plan was to drop by later for lunch, which would probably involve a couple of cheese-steak sandwiches. Their were a few people shopping for some fresh produce, which must have been okay. At least that is what their sign implies. Being out-of-towners, we weren’t shopping for fresh fruit and veggies, so we made our way to the door for now. Back To the Reading Market For Seconds

We held off until a little after lunch time, as we expected the place to be busy. As we wandered around, we made note of the variety of restaurants. Being so close to the ocean meant plenty of fresh seafood, but not what we were looking for. We had decided the cheese-steaks must be sampled while in Philly, so now just to find the right place. 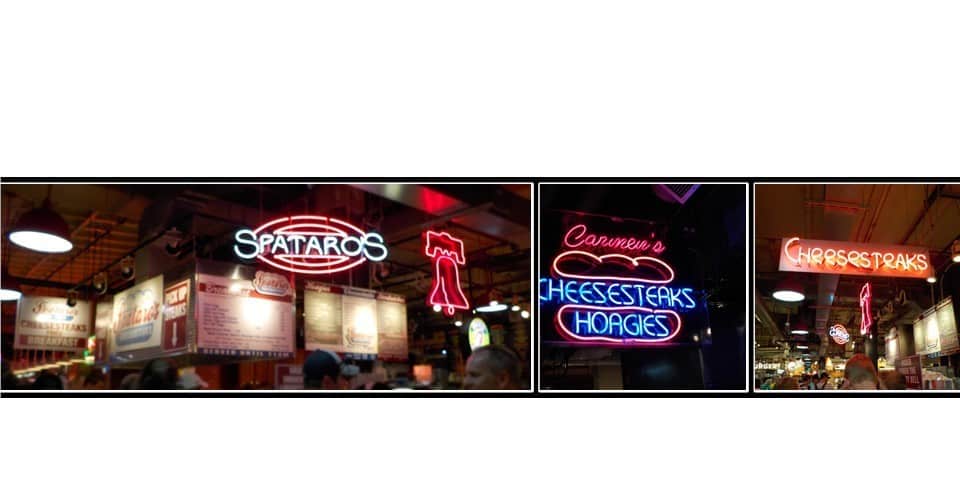 How Many Cheese-steak Restaurants Are There?

As we walked we spotted a variety of counters dishing up authentic Phillies. How were we going to find the best one? By chance, a police officer passed by, and yeah I stopped them for some insight. His directions were a little vague, but he may have been afraid to pick a favorite. He did point to one nearby, and we decided it would be the test subject.

Even though it was now about an hour after the lunch rush, it was still quite busy. (The video shows the constant flow) Well, our stomachs were pretty angry with us by now, so we plunged into the crowd, and made our way into the line at Spataro’s. Real Philly cheese-steaks are ordered with just a few words. How many? With or Without peppers and onions? Cheez Wiz or Provolone? So our order ended up being “One without Wiz and One without Provo”. Pretty simple, huh? After ordering you can watch them prepare it as you creep along in line. So finally after years of waiting, we were preparing to sample our first Philadelphia cheese-steak sandwiches at Reading Market. A few bites in we both agreed that it was an acquired taste, which we had not yet acquired. While they were good, we could both think of plenty of other sandwiches that rank higher on our scale. They weren’t bad, just not our favorite. We did finish them, before heading back into the fray to see what else was in this place. Here and there we would see a shop selling sweets, but mostly they were cakes or baked goods. We finally made our way through all of the aisles until we were on the opposite end of the building. This was no easy feat with the overwhelming crowd. Here we found the mother lode of sweets. Mueller Chocolate Co. has a long, and tempting, series of display cabinets filled with a wide range of offerings. We are not amateurs when it comes to visiting chocolatiers, but this place was impressive by the sheer volume and quantity that they produce. A display case at least 25 feet long was packed full of about every variety of truffle imaginable. At least any flavor you would want to taste. How can you decide when there are this many options? Do Our Eyes Deceive Us?

One of the most unusual displays we found at the Reading Market was this case filled with novelty chocolates. Sure, we have all seen the specialty molded items that are available to celebrate being a doctor or police officer. Even the musical instrument chocolates were a little different, but still imaginable. It moved into the odd category when we noticed the chocolate body parts. Yes, body parts! Ears. noses, lungs, teeth, and a lot of other pieces and parts of the human body have been cast in chocolate. If that isn’t your thing, then you can always get your sweetheart a chocolate rat on a stick. Doesn’t that just say I love you? All of these options were making our choice way too difficult, so we settled on some farm fresh ice cream. maybe next visit we’ll sample a chocolate hand or foot, but not on this trip.